The Federal Government has been asked to diversify from fossil fuels for power generation to safe and clean alternatives which solar panels, wind and hydro offer. 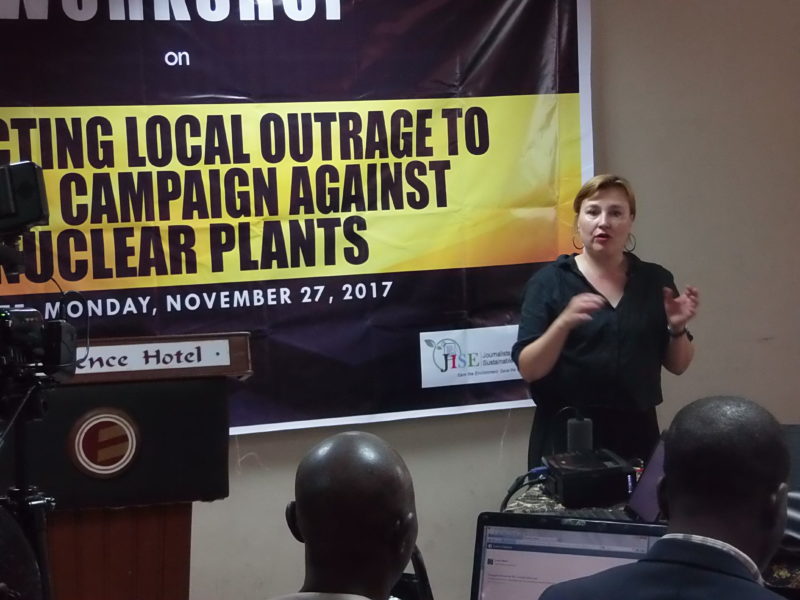 Iida Simes, a Finnish journalist, speaking during the workshop

Additionally, the authorities were called upon to halt and completely discard ongoing plans to build nuclear reactors in the country, and that details of the memorandum of understanding (MoU) with nuclear firm, ROSATOM, and the recently signed agreement should immediately be made public and subject to the purview of relevant stakeholders.

The calls were made at a one-day workshop on Connecting Local Outrage to Global Campaigns Against Nuclear Plants in Lagos on Monday, November 27, 2017. The Centre for Social Change and Citizenship Education (CENSOCHANGE) in partnership with Journalists Initiative for Sustainable Environment (JISE).

Participants were drawn from civil society, the media, community-based organisations, and pro-democracy groups.

At the close of discussions participants observed that:

The gathering thus charged government to ensure proper oversight on the activities of NAEC which, it notes, seem to have limitless powers in its engagement with foreign governments.

Participants also want the media to explore the possibility of using the Freedom of Information Act to demand information on the Russia-Nigeria nuclear reactor deal which, they allege, is still under the wraps of the NAEC.

They also demand consultative meetings with community/civil society groups on the plans to build nuclear reactors to sample their views.

“Community consultations which have thus far not been carried out in Akwa Ibom and Kogi states must include women and vulnerable groups to sample their views on hosting of nuclear plants,” the participants said in a communique made available to EnviroNews.

While demanding that more findings on ROSATOM track-record should be conducted, the forum emphasised: “The recently-released ROSATOM Risk Assessment Report by Greenpeace can serve as guide in taking further decisions relating to nuclear plants in Nigeria.”

In his welcome words, chair of CENSOCHANGE, Doifie Buokoribo decried Nigeria’s dependence on fossil fuels for energy generation which, he said, still left the nation with a fluctuating 4,000 megawatts of power, old infrastructure, and forced shut downs of power plants.

Buokoribo said that while it is commendable that the Nigerian government is interested in options outside of fossil fuels, the recourse to nuclear energy when the rest of the world is walking away from that path is very embarrassing and dangerous.

Presentations at the workshop included: “The Little We Know About Nigeria’s Nuclear Plans” delivered by Philip Jakpor of the Environmental Rights Action/Friends of the Earth Nigeria and “Some Nuclear Facts” by Iida Simes, a Finnish journalist.

Panel sessions were on the topics such as “Reporting Nuclear Plants in a Freedom of Information Regime” and “Avoiding Another Niger Delta Tragedy: The Role of Civil Society and Host Communities”.

Objectives of the workshops were listed to include: