April 9, 2017 Comments Off on Pinnick thanks Dalung, Super Eagles improve in rankings 833 Views

Executives of the Nigeria Football Federation (NFF), led by the president, Amaju Pinnick, have paid a courtesy visit to the Minister of Youths and Sports, Solomon Dalung, thanking him and Nigerians in general for their support in the last CAF elections. 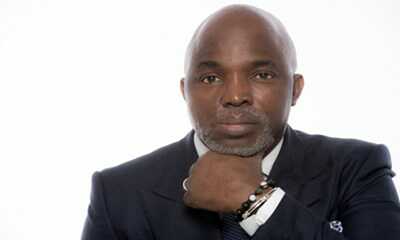 Pinnick won a place on the CAF Executive Committee during the elections.

Pinnick said his victory would not have been possible without the backing of the minister and the good people of Nigeria.

“Our visit is to say ‘Thank you’ for the support you gave us, when we embarked on the journey. You encouraged us to go and conquer and make sure we get ourselves into the continental body, as Nigeria is too big not to be part of such body,” Pinnick stated.

In his response, Dalung, on behalf of the federal government, urged Pinnick to use his new position in CAF to better the lot of Nigerian football.

“You must put to  bare not only your wealth of influence, but you must exert the corporate integrity of Nigeria, anywhere you find yourself taking decision that affects the country,” Dalung said, calling on the NFF authority to, as a matter of urgency, attend to decadence of football facilities in the country.

Meanwhile, the latest football rankings released by FIFA on Thursday, April 6, 2107 came as good news to Nigeria following the Super Eagles’ rise to 40th position in the world and 5th in Africa.
Nigeria picked up points from the 1-1 draw against Senegal in London to move one spot in the latest rankings and also behind Egypt, Senegal, Cameroon and Burkina Faso in Africa’s top five.

South Africa, Libya and Seychelles who are group rivals to Nigeria in the race to 2019 AFCON are ranked 64th, 91st and 196th respectively.

The 2019 AFCON qualifiers start in June.

In a related development, the Nigeria Professional Football League (NPFL) has suspended the referee who officiated the match between Gombe United and Rivers United on Saturday, April 2, until the end of the season. Referee Salafa Agboola had disallowed the goal scored by Rivers United by Asamoah Godbless in the 84th minute decided at the Pantani Stadium, Gombe.

Secretary to the Referee’s Committee of the NFF, Sanni Zebai, on Wednesday reached a decision that Agboola of Osun State Referees Council be suspended till the end of the season.

Zebai added that the decision to suspend Agboola was as a result of poor handling and sheer display of incompetence which affected the outcome of the match.
He added that video clips and report of Referee Assessors found the referee wanting in the discharge of his duties, which also revealed gross abuse of the Law of the Game in the said match.

The sanctioned referee has been recommended to the Disciplinary Committee for further action.