As part of efforts to sensitise Nigerians on the National Tobacco Control Act, the Federal Ministry of Health and the Environmental Rights Action/Friends of the Earth Nigeria (ERA/FoEN) have unveiled pictorial representations of provisions of the Act. 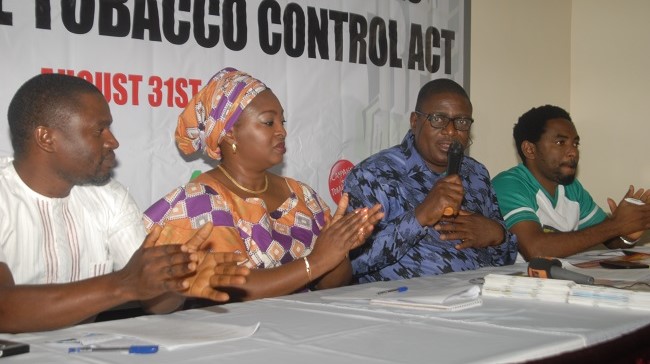 The provisions include “Ban on smoking in public places, Ban on Sale of cigarette to minors, and Ban on Sale of Cigarettes in single sticks”. It also pictures the sanctions for defaulters.

At a press briefing held in Abuja, ERA/FoEN said that the information materials were created to deepen awareness on the nine provisions of the NTC Act that Health Minister, Professor Isaac Adewole, announced would be enforced without any regulations

The ERA/FoEN deputy executive director, Akinbode Oluwafemi, said that, as partners in progress with the Federal Ministry of Health, it identified the need to further deepen tobacco control messages through public awareness materials that answer the critical need for ordinary Nigerians to know, through visual images, the letters of the NTC Act.

“Ignorance of the law is no excuse. We believe that all Nigerians, including those who cannot read and write should be able to understand the law,” Oluwafemi said.

Malau said that the partnership between the ministry and civil society on tobacco control had been very productive and that security agencies were already primed to enforce the ban on smoking in public places and other provisions of the NTC Act,

Earlier, Hilda Ochefu, the sub-regional coordinator of the Campaign for Tobacco-Free Kids (CTFK), said that the unveiling of the public awareness messages was indicative of the fact that the tobacco control message in Nigeria had come to stay and would go to grassroots people who are critical to citizen enforcement of the Act.

In addition to the public awareness materials, ERA/FoEN also demanded for commencement of enforcement of the nine provisions of the NTC Act by relevant government agencies and states across the federation. It also asked for expedited action by members of the National Assembly to see the National Tobacco Control Regulations Bill passed so that enforcement of the other provisions of the NTC Act will commence without delay.