Paris goals need support of all sectors of society – Mohammed

October 16, 2017 Comments Off on Paris goals need support of all sectors of society – Mohammed 750 Views

Ahead of a Ministerial meeting in Fiji to finalise preparations for the UN Climate Change Conference in November in Bonn (COP23) scheduled to hold from November 6 to 17, 2017, a Partnership Days was held to further foster efforts to build a grand coalition for climate action.

The Partnerships Day builds on the the outcomes of the Climate Action Pacific Partnership (CAPP) Conference held in Suva July 2017 and the UNFCCC Climate Action Agenda. The day focused on best practice climate actions, as well as needed innovation to boost action. Some of the themes explored included looking at how the private sector, cities, regions and other non-Party stakeholders can contribute to the implementation of countries’ climate action plans under the Paris Agreement (Nationally Determined Contributions), climate finance and risk management.

The Partnerships Day was opened by Prime Minister of Fiji and incoming COP 23 President, Frank Bainimarama. In an address at the opening, UN Deputy Secretary-General, Amina J. Mohammed, says that the Paris Agreement is not a chain that can be broken by a weak link, but a web of ever deepening and widening influence in terms of realising a better, safer and more secure future for every one on Earth. 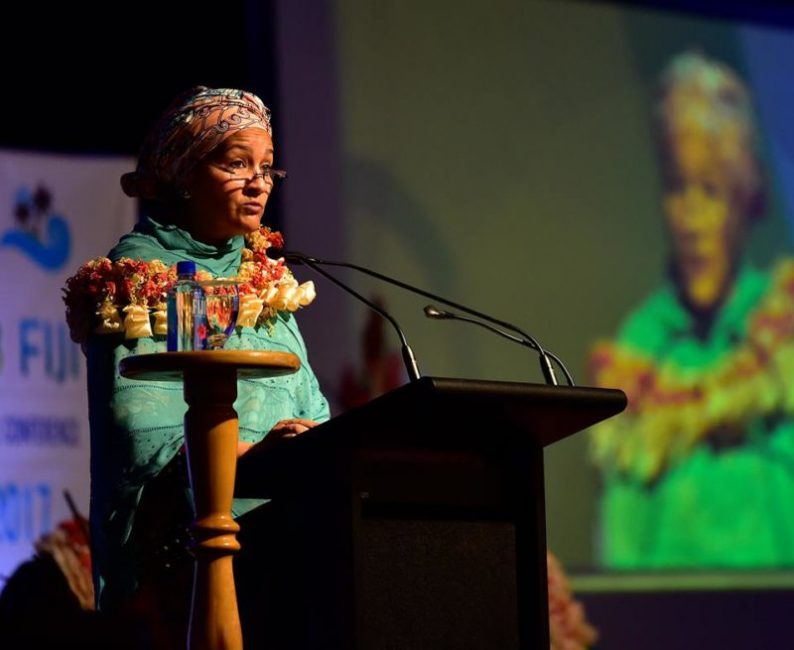 It is a hallmark of the Agreement that so many leaders from cities, states, regions, territories, the private sector, the investment community and civil society came in with pledges and initiatives to take climate action.

The enthusiastic support for the Paris Agreement as a key pillar of the 2030 Agenda for Sustainable Development continues.

In the run-up to and during Climate Week in New York in September, on the margins of the Un General Assembly, many more companies and local authorities committed to action.

RE100, an initiative in which companies commit to 100 per cent renewable energy, welcomed new partners including Estee Lauder, Kellogg’s and DBS Bank.

EV100, launched this year, is bringing together companies committed to accelerating the transition to electric vehicles and making electric transport the new normal by 2030.

The Under2Coalition, whose members are committed to reducing emissions by up to 95 per cent by 2050, welcomed new signatories, including major cities and the Marshall Islands, which became the 17th nation to endorse the Coalition.

We could spend all day trying to capture the breadth and scale of this momentum.

We are moving – taking important steps, but of course it is not enough.

Paris is a global agreement of nations – but it needs the global support of all sectors of society from all across the planet to minimise risks and provide security and opportunity for all.

In the words of Frank Bainimarama, Fiji’s Prime Minister and the incoming President of the next UN climate change conference, we need a Grand Coalition.

While support for the Paris Agreement from sub-national governments is gathering momentum in developed and developing countries alike, support from business and investors is still predominantly from Europe and the United States.

So, I welcome the establishment of the Climate Action Pacific Partnership as an important new piece in the Grand Coalition jigsaw puzzle and a new catalyst for the Marrakech Partnership for Global Climate Action.

The bringing together of business, investors, funders and governments from within and outside the region to accelerate implementation of national climate action plans is a significant new development.

The other challenge is to bring all sectors of society and the economy into alignment with the Paris Agreement’s pathways, timetables and goals — including finance, so that funding flows into the low carbon, sustainable economy that must be the future.

We must also engage and enroll the higher emitting sectors of the economy.

As some of you may recall, during the high-level segment of the General Assembly last month, the Secretary-General outlined six high impact areas where our collective efforts can bring a structural change in the global and national economies:

Our shared challenge is to connect reality on ground with collective action in these areas.

By the 2019 Climate Summit, we must be able to show that climate action works and that transformation is well under way.

I am very encouraged that a number of leaders have come forward.

The Prime Minister of Sweden announced his intention to create a zero-emission steel industry through the full electrification of furnaces using hydrogen rather than coal as fuel.

The Prime Minister of Denmark voiced his intention to establish a “Clean Energy Investment Coalition” to accelerate a shift from fossil fuels.

The international Solar Alliance led by India and France intends to mobilize $1 trillion by 2030 and bring together rich countries to deliver solar energy in some of the poorest countries of the world.

Let us also recognise the key role of non-state actors in the implementation of the Paris Agreement.

The Secretary-General and I encourage all involved to uphold these pledges and commitments.

This is just the kind of innovation that the Paris Agreement, supported by the private sector and partnerships, can catalyse and take to scale worldwide.

I look forward to your outcomes here as a contribution to the success of the UN climate conference in Bonn.

This is the next staging post for accelerating action and ambition.

Urgency and speed must be our bywords.

This Pre-COP and COP-23 come against a backdrop of a distressing period of extreme weather events that have brought misery and economic damage to so many people from Asia to the Caribbean and central America and the United States.

The Secretary-General is concerned that international governance and the global development system are not fit for purpose to address these challenges well in advance of their impacts. Besides removing barriers to accessing financing, innovative financing mechanisms are needed to meet the needs to middle income countries that face such external shocks.

Such events are virtually certain to become not only more frequent but more intense. It is time to rethink our approaches.

I am pleased to note that these two Partnership Days are being spent on the crucial issue of better managing climate risk and building resilience.

We know there is a lot more that can be done to assist and buffer small island developing states and vulnerable regions from such events.

And there is a lot more that richer governments, working with the private sector – including the insurance and re-insurance industries – can do to support countries and people to re-build.

I am pleased to see the German government here, which I understand will announce plans at COP23 to take forward the InsuResilience initiative, aimed at helping 400 million of the world’s poorest people, with direct and indirect affordable insurance.

We live in a world of rising risks from climate change – including risks to the very life support systems upon which so many depend.

These include our seas and our oceans – so I welcome your discussions today on how to breathe life into the Oceans Pathway Partnership with a view to bringing action on healthier oceans into the UN climate change process by 2020.

But, while the risks rise, so too does the momentum for change.

Cities and regions, businesses and investors are playing a critical role, providing crucial support and new levels of creativity to help governments as they fast-forward their climate action plans and the wider sustainable development agenda.

So, I congratulate the government of Fiji and everyone taking part in these Partnership Days here at the pre-COP.

It underlines that the UN climate process is strengthening its foundations and potential.

It shows that the Paris Agreement is not a chain that can be broken by a weak link, but a web of ever deepening and widening influence in terms of realising a better, safer and more secure future for every one on Earth.