Keeping the world below the 2 degrees Celsius pathway presents a US$12.1 trillion investment opportunity over the next 25 years – in the light of the newly agreed Paris Agreement, a new analysis states.

The report Mapping the Gap: The Road From Paris, presented last week by Bloomberg New Energy Finance (BNEF) at the 2016 Investor Summit on Climate Risk hosted by Ceres, shows the opportunities and challenges of filling the ‘gap’ between the business-as-usual (BAU) investment in renewable energy and what is needed to avoid the worst effects of climate change.

At the Summit, the UN Secretary-General Ban Ki-moon called investors to at least double their investments in clean energy by 2020, adding that “we must begin the shift away from fossil fuels immediately.” 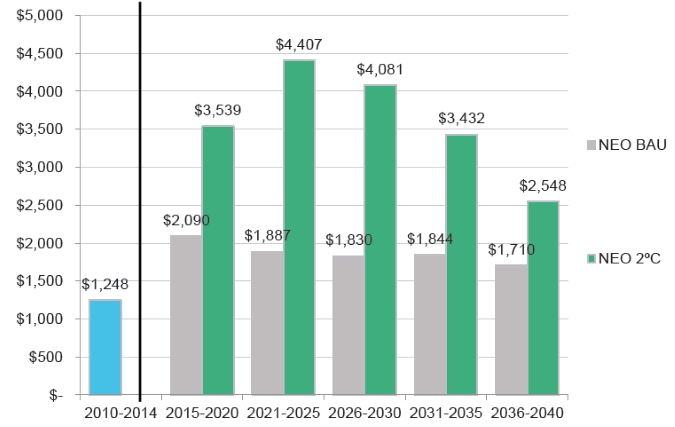 BNEF forecast of total investment in lower-carbon power generation (US$ billion, real). From the report Mapping the Gap: The Road From Paris, courtesy of BNEF.

Just a month ago, countries signed at COP21 in Paris a historic agreement to tackle climate disruption and keep global warming well below 2 degrees Celsius, compared to the pre-industrial era. However, the report by BNEF shows that to achieve this goal, investment in new renewable power generation must increase 75% above the BAU trajectory.

In fact, if governments and business leaders take no additional steps to what they have planned today, the investment opportunity for tackling climate change is US$6.9 trillion, or US$277 billion per year.

The ‘gap’ between this scenario and what is needed to keep the world safe is US$5.2 trillion, or US$208 billion per year. To put the numbers in perspective, authors point out this is far less than the US$454 billion per year that people in the US ask every year to get their auto loans.

Nevertheless, “there still remains much to be done,” says Mark Kenber, CEO, The Climate Group, in a recent blog. “While the leaders in the investment, corporate and sub-national communities have demonstrated that bold climate action brings economic benefits, the task now is to ensure those in the mainstream follow this leadership.” 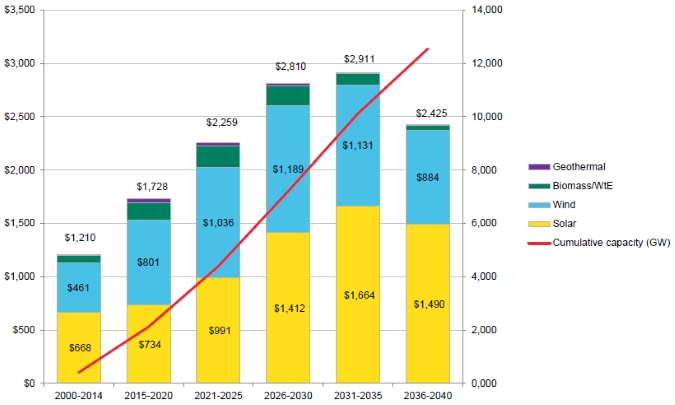 To reach this point, renewable investment must scale up quickly in the next 15 years, grasping opportunities already available today to reach 12,500 gigawatts globally by 2040.

Under this scenario, which excludes large hydropower investment, wind and solar have the lion’s share growing 46% and 43% respectively in the first decade – thanks in particular to their increasingly lowering prices and off-grid potential.

To scale up the opportunities offered from the 2 degrees pathway, many policies have proven to be successful. One of these solutions is putting a price on carbon, such as the system created in 2014 by Québec and California – governments that are part of The Climate Group’s States & Regions Alliance – that created the first cross-border market in North America.

Also Ontario, another valuable member of the States & Regions Alliance, last year launched a ‘cap-and-trade’ system to curb its emissions, aiming to link it to the system set up by Québec and California.

Other solutions envisaged by the report are tax incentives, to accelerate investments on clean power plants and manufacturing facilities, and feed-in tariffs to spur a widespread adoption of renewables among customers and businesses.

“Clean energy financing is poised to ‘grow up’ to more fully resemble other, better established infrastructure sectors,” conclude the authors of the report, “such as transportation or real estate, from a financial structure perspective.

“These new finance vehicles will present massive new opportunities for capital deployment. Policy makers need to ‘mind the gap’ to ensure that investment grows at the speed and scale required.”

By Ilario D’Amato (The Climate Group)

Previous: Osun identifies 60 million active cocoa trees
Next: Kinley: After the Paris elation, what next?