A considerable number of nations around the world have resated their commitment to the Paris Agreement on Climate Change, even as the United States continue to dither on the global treaty. 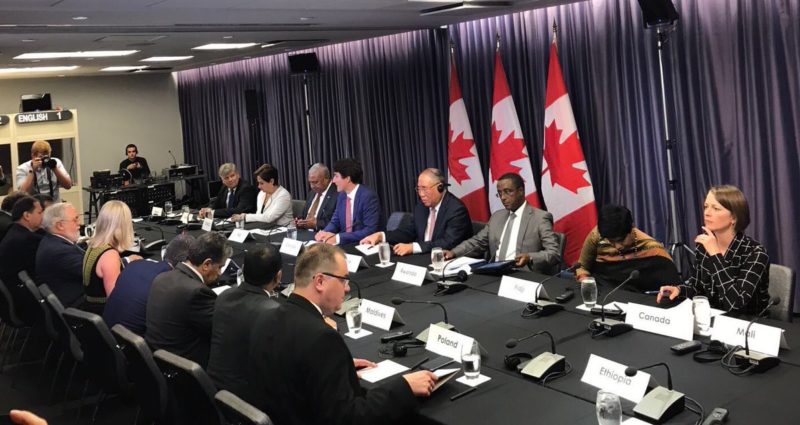 Participants at the Ministerial Meeting on Climate Action in Montreal, Canada

The Paris Agreement, which entered into force on November 4 2016, brings all nations into a common cause to undertake ambitious efforts to combat climate change and adapt to its effects, with enhanced support to assist developing countries to do so.

At a Ministerial Meeting on Climate Action convened by Canada, China, and the European Union, a majority of the participants expressed the fact that the Paris Agreement was irreversible and that it would not be renegotiated.

The United States, however, re-confirmed that it would withdraw from the Paris Agreement but that it is open to re-engaging on terms more favourable to it.

The Paris Agreement requires all Parties to put forward their best efforts through “nationally determined contributions” (NDCs) and to strengthen these efforts in the years ahead. This includes requirements that all Parties report regularly on their emissions and on their implementation efforts.

The meeting, which featured representatives from 34 governments of major economies and other key players on climate change, was aimed at advancing discussions on the full implementation of the Paris Agreement and to demonstrate continued political commitment to global action. It held on Saturday, September 16, 2017 in Montreal, Canada.

Recognising that the environment and the economy go hand-in-hand and that ambitious climate action will protect the environment, spur clean growth and sustainable development, create jobs, and improve human health, participants emphasised that global efforts are at a critical juncture, even as they indicated a strong commitment to the full implementation of the Paris Agreement.

Participants also underscored the importance of providing clarity and certainty to all actors, including investors, and thus acknowledged their political commitment to complete the Paris Work Programme in 2018.

Many expressed the importance of the Paris Agreement and its modalities, procedures, and guidelines to continue to build trust and help solidify confidence in the global commitment to climate action. It was highlighted that technical negotiations at COP23 should build on the spirit of Paris, and be constructive and balanced to advance consensus on modalities, procedures and guidelines that will help all Parties in the implementation of their Paris Agreement obligations.

There was support for the efforts of the Moroccan and Fijian COP Presidencies in determining the modalities for the 2018 Facilitative Dialogue, based on consultations with Parties. It was reiterated that the Dialogue should help Parties take stock of progress made and further drive ambition, including in collaboration with non-state actors.

The importance of pre-2020 action and the need to build on current efforts were acknowledged. Many also pointed to the importance of financial, technology and capacity building support and recognised the progress being made. Furthermore, participants highlighted their support for the Marrakesh Partnership on Global Climate Action, pointing out that sub-national governments, Indigenous and local communities, and non-party actors are essential in achieving these objectives, and that multilateral processes should continue to be more inclusive and recognise the importance of gender equality.

To share lessons and best practices, many participants highlighted their countries’ approaches and experiences in reducing emissions and adapting to climate change, and broadly emphasised their steadfast determination to implementing these efforts and their NDCs. It was underscored that taking action now is critical in order to accelerate the global transition to a low-carbon and resilient economy. A number of participants welcomed the momentum and movements of the market in that regard and underscored the importance of carbon pricing.

In light of the commitment to moving forward together and demonstrating progress, a message was sent to negotiators to carry forward the positive and open spirit of the Ministerial on Climate Action to advance their work on implementing the Paris Agreement through the completion of the Paris Work Programme and the 2018 Facilitative Dialogue.

Canada, China and the European Union were thanked for taking this initiative and for their offer to co-convene a second meeting in 2018 in Europe.