Leading non-state actors and civil society groups from across Africa have called on African governments to kick-start the process of designing an African Rule Book for the implementation of the Paris Agreement. 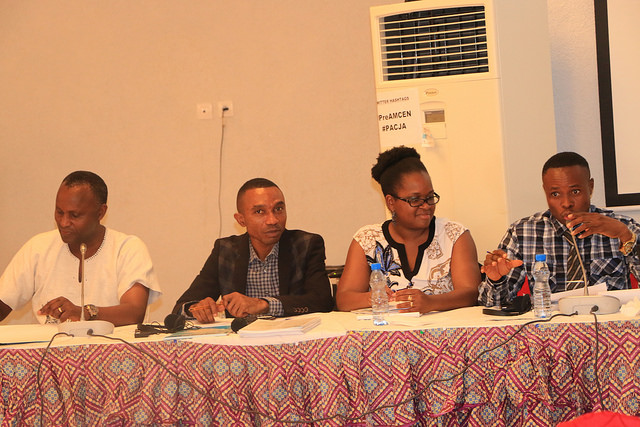 Discussants at the African Civil Society Consultative Workshop organised by PACJA ahead of the 16th Session of the African Ministerial Conference on the Environment (AMCEN) in Libreville, Gabon. They called on African governments to kick-start the process of designing an African Rule Book. Photo credit: CSDevNet/atayibabs

The book, according to them, will help in galvanising a robust presentation of African perspectives in the Paris Rule Book which is being formulated.

The call was made on Sunday, June 11, 2017 at the ongoing civil society consultative talks which precedes the 16th session of the African Ministerial Conference on Environment (AMCEN) in Libreville, Gabon.

“We want an African Rule Book for the implementation of the Paris Agreement that will better measure and manage climate action and support in the light of varying quality and level of information included in countries’ national climate plans (NDCs),” John Bideri, the Co-Chair of the Pan African Climate Justice Alliance (PACJA), said.

“An African Rule Book will help in scaling up actions and support at the right pace as many of the NDCs submitted by countries are not ambitious enough to achieve the Paris Agreement’s objectives,” Bideri added.

The urgency of the call for an African Rule Book is further underlined by the latest UNEP Gap Report which revealed that the climate plans submitted by all parties to the Paris Agreement can only limit global warming to 3o degree C if fully implemented and the conditions highlighted in the submissions are met.

This alarming report, according to Yamide Dagnet of the World Resources Institute, justifies the readiness of civil society groups like PACJA and WRI to mobilise resources and partnerships capable of supporting the drafting of the African Rule Book by African governments.

At the recent UN climate negotiations in Bonn which featured the 46th sessions of the Subsidiary Body for Implementation (SBI 46) and Subsidiary Body for Scientific and Technological Advice (SBSTA 46) as well as the session of the Ad Hoc Working Group on the Paris Agreement, negotiations on the key elements of the Paris Rule Book began in earnest.

According to Achala Abeysinghe, a long serving legal and strategy advisor to the Least Developed Countries Group (LDC), “The Paris Agreement is just an empty shell without the Rule Book”.

The Paris Rule Book seeks to establish the rules and processes needed to provide the operational guidance for fulfilling the ambition of the Agreement and providing clarity on countries’ efforts to reach the global goal.

The rule book comes on the heels of the Paris Agreement which created an international framework that outlines what governments and wider stakeholders are expected to do strengthening the global response to climate change and limit the temperature increase to 1.5 – 2 degrees C.

It therefore seeks to flesh out how the global response will be orchestrated.

By 2018 negotiators are expected to reach an agreement on the rule book which will include details on how countries will communicate their efforts with regards to adaptation, climate finance, transfer of technology and capacity building, and how they will be held accountable for their commitments.

It will also establish how collective efforts will be reviewed, leading to scaled-up actions and support every five years; as well as create a facilitatory process for the implementation of the agreement and promote compliance.