Nigeria last week showed serious intent towards a memorable participation at this year’s climate change summit in Paris as major stakeholders met in Abuja to review the outcome of the previous conference held last December in Lima, Peru and chart a new course for the future. 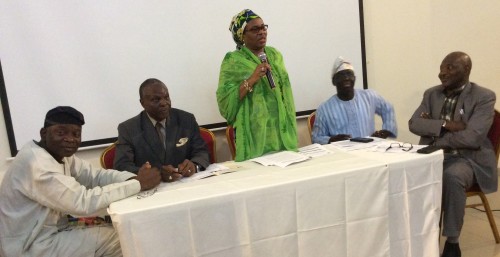 Participants brainstormed for three days at a Post Lima Workshop and Meeting of the Inter-ministerial Committee on Climate Change in preparation for the Subsidiary Bodies to the UNFCCC and the Ad Hoc Working Group on the Durban Platform for Enhanced Action (ADP 2.9), which will convene in June 2015 in Bonn, Germany and up to Paris. The forum was organised by the Department of Climate Change in the Federal Ministry of Environment, in collaboration with the United Nations Development Programme (UNDP).

The workshop was part of a series of national meetings planned to brief stakeholders on the outcomes of Lima, status of negotiations as well as reviewing Nigeria’s national positions on the negotiation issues. The workshop also examined opportunities in the context of Adaptation Fund and the Green Climate Fund (GCF) as regards sourcing the funds.

Permanent Secretary, Federal Ministry of Environment, Mrs. Nana Fatima Mede, opined that climate change is having disproportionate negative impacts on the developing countries, including urban and rural communities in Nigeria.  According to her, climate change has long gone beyond a mere environmental issue but is now scientifically proven and understood to be political, economic as well as social issue.

“Climate change is disrupting national economies, militating against countries development efforts with the threat of reversing even successful efforts that have been achieved over the years.

“There is however a growing recognition that affordable, scalable solutions are available now that will enable us, as a developing nation, to leapfrog to cleaner, more resilient societies and economies thereby turning the challenges of climate change into opportunities,” she said.

Mede noted that the COP 21 came up with Lima Call for Action by agreeing to a text, which will essential form the core of the anticipated climate change agreement in Paris later in the year while the Ad Hoc Working Group on Durban Platform (ADP) meeting in Geneva elaborated on some of the issues in the adopted text for clearer understanding during implementation.

She said: “It is imperative that Nigeria prepares adequately for the meetings of the Subsidiary Bodies to the UNFCCC and the ADP sessions scheduled to hold early in June 2015. The session has been convened by the Climate Change Secretariat to continue negotiation and clarification of some issues yet to be resolved in anticipation for having another legally binding instrument in Paris 2015.”

The Permanent Secretary disclosed that Nigeria as Party to the UNFCCC (United Nations Framework Convention on Climate Change) has the opportunity to explore climate funding for the implementation of its climate change programmes and projects through adaptation fund, and Green Climate Fund (GCF).

She added that approval has been obtained for the preparation of the nation’s Third National Communications (TNC).

“The TNC is expected to critically examine the components on the initial draft, identify sections where expert could elaborate upon and share lessons learnt from the second National Communication. The outcome of the TNC will afford the country the opportunity to show to the world what is, and how Nigeria is addressing the challenges of climate change.”

Director, Department of Climate Change, Dr Samuel Adejuwon, who spoke on the status of negotiation, stated that, in Lima, delegates adopted the Lima Call for Climate Action, even as parties to the UNFCCC agreed on loose arrangements for bringing forward their intended nationally determined contributions (INDCs) to the Paris agreement.

He said: “Developed countries wanted ‘nationally determined commitments’ to focus only on mitigation, while many developing countries pushed to include adaptation and finance too. To help clarify and assess parties’ contributions, the decision identifies certain information that parties might provide, as appropriate, including ‘quantifiable information’ on an INDC’s timeframe, scope and coverage, and the assumptions and methodologies used in estimating and accounting for emissions.”

Adejuwon stated that COP 20 featured the first-ever “multilateral assessment” of mitigation efforts by developed countries, part of a new set of transparency procedures established under the 2010 Cancún Agreements. “Under a parallel process called international consultations and analysis (ICA), developing countries are now submitting their biennial reports.”

On finance, he disclosed that developing countries calls for interim targets toward the $100 billion a year to be mobilised by 2020.

“The COP instead urged developed countries to “enhance the available quantitative and qualitative elements of a pathway, placing greater emphasis on transparency and predictability of financial flows,” he noted.

Under Loss and Damage, he explained that the COP decided on the composition of the mechanism’s executive committee and adopted an initial two-year work plan outlining a detailed set of activities to better understand unavoidable climate impacts and to identify and promote risk management strategies and other responses.

In his presentation on ADP Geneva Text, Deputy Director, Department of Climate Change, Peter Tarfa, explained that ADP 2.8 held in Geneva, Switzerland, in February 2015, fulfilled the mandate given to it by COP20 under the “Lima Call for Climate Action” decision.