June 10, 2020 Comments Off on Panama launches new programme towards implementing its NDC 998 Views

Panama’s Regional Collaboration Centre (RCC), which supports national climate action, has reached what looks like an important milestone with the launch of a new national carbon footprint programme by the Government of Panama branded “Sustainable Panama: Reduce Your Footprint”.

The overall objective of the programme is to encourage public and private organisations to reduce their carbon emissions – for example through energy efficiency programmes and the use of renewable energy resources such as wind or solar power – and to support them in doing so.

The programme is designed to cover government ministries, the Panama Canal, organisations in the logistics, construction, forestry, agriculture, tourism and hospitality industries, as well as academia and the financial sector.

Support is provided through the “Collaborative Instruments for Ambitious Climate Action” (CiACA), a global initiative that assists governments in developing carbon pricing instruments for implementing their Nationally Determined Contributions (NDCs),which are national climate action plans under the Paris Agreement.

The centres were established to spread the benefits of the Clean Development Mechanism (CDM), which spurs investment in sustainable development by rewarding projects that reduce greenhouse gas emissions. Since the adoption of the Paris Agreement in December 2015, the RCCs have had the broader task of supporting implementation of countries’ NDCs.

Panama, home to one of the RCCs, is a leading CiACA country in Latin America, the first to move from the initial stages of stakeholder engagement and technical analysis to the effective adoption of a carbon pricing instrument. It is also a technical partner of the Partnership for Market Readiness (PMR), thus making it a leading regional example of a more ambitious regional framework and a pilot case for CiACA globally.

CiACA has supported the development of standards and a registry to measure, verify and report greenhouse gas (GHG) emissions. The groundbreaking impact of the adoption of this tool is that, while it is intended as voluntary, the government is planning to make it a requirement to be able to access the funds that will be made available for the post-COVID-19 recovery.

Three workshops targeting different audiences (government, private sector and civil society) were planned to present the tool, and two of them held recently.

The first of the three workshops took place on May 27, 2020 and targeted around 65 government officials, particularly Ministry of Environment personnel, who were also trained on how to use the application.

The second workshop took place on June 3 and targeted around 40 representatives from the private sector, academia, chambers of commerce and the Canal.

Speaking at the opening of the event, UNFCCC Mitigation Director, James Grabert, said: “What makes the adoption of the GHG inventory standards for GHG monitoring instrumental today is that they come at a moment of great challenge, but also of great opportunity — opportunity for economies to transform.

“The choice of the Government of Panama to make adoption of the tool linked to pro-climate policies sends a meaningful signal to the economy and represents an important step towards achieving the Paris goals.” 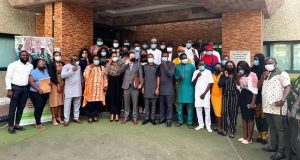