A group of African civil society organisations (CSOs) on Monday, July 12, 2021 commenced a weeklong meeting in Abuja, Nigeria to deliberate on key issues touching on COVID-19 and its nexus with the climate change on the continent, especially issues that will flow into the 26th Conference of the Parties (COP26) to the UN Framework Convention on Climate Change (UNFCCC) holding in Glasgow, UK in November.

Coming from numerous countries across Africa, the CSOs, coalescing under the Pan African Climate Justice Alliance (PACJA), are deliberating at the “Road to COP26 Conference” on the effects of climate change and strategies to mitigate its impacts on Africa’s vulnerable communities. In addition, the CSOs will also be launching a strategic plan to guide the continent’s response to unfair legal and policy regimes that have existed in global discussions on climate change.

Indeed, the PACJA board will among other things launch a new strategic plan to guide their aspirations in the next decade, and probably be hitting another key milestone.

Formed in 2008 by a group of then youthful and ambitious climate activists, PACJA has now grown to be the single largest platform that coalesces the voices of the African civil society groups in all the UNFCCC dialogue processes wherever and whenever they hold.

Dr Mithika Mwenda, co-founder and now its Executive Director, said since its formation, PACJA has positioned itself as one of the most influential civil society platforms in global climate change and environmental conversations in Africa and around the world.

“We have become a platform where civil societies amplify the continent’s voice and articulation of critical demands in international forums,” he said, adding that PACJA was instrumental in supporting its member organisations and national platforms to engage decision-makers in strategic policy dialogue processes at all levels.

According to Dr. Mwenda, it is not that there were no efforts to speak on issues of climate change in Africa. “There were,” he noted, but that “these voices and efforts were scattered across Africa. We would meet in conference and African delegates from different countries would be talking uncoordinated things, they had neither unified message nor coherent approach; they were essentially wasteful advocacy efforts.”

“However, with the formation of PACJA, we have been able to bring these scattered voices together. Today, thanks to our coordinated approach, the African voice is heard far and wide in every dialogue on climate change at local, national and international levels,” he said.

Long before PACJA begun to raise the issues of climate change in public limelight across Africa, the impacts of global warming were becoming apparent even to the uneducated rural African villagers.

“We started noticing rivers drying up, farming seasons were shifting, farm yields were falling due to decreasing rain fall that was becoming unpredictable and yes, there was also noticeable frequent droughts and famine which saw a growing number of people relying on relief food,” recalls Fathya Abdulmajid, a co-founder whose family has had a long history of farming along the Kenyan coastal counties.

Although loosely tied, the alliance of organisations that form PACJA are drawn from over 1,000 community-based groups, faith based organisations, CSOs and others from across 45 of the 51 African countries in every of the four regions of Africa, namely, the East, West, South, North.

At the heart of PACJA’s work is the principle of climate justice, underpinned by the reality that the continent has contributed negligibly to the atmospheric stock of greenhouse gas emissions, yet it is “the most vulnerable with limited resources to adapt to climate change impacts,” the single most bitter reality that motivated PACJA founders in climate activism and still does drive advocacy agenda of the Alliance members.

“The most vulnerable segments of society are the most endangered by climate impacts: indigenous peoples, pastoralists, women, the disabled, the young and the elderly,” a line from the Strategic plan reads.

At the same time, Dr Mwenda adds, it is also these vulnerable groups that have the least say in the policies and decisions that governments make to address the climate and environmental crisis. “This lack of voice adds to the injustice,” and PACJA sees its role as mitigating these injustices.

For example, adds, Robert Kithuku, who at one point represented the youth wing of the Alliance but now is the Climate Change Programme Coordinator at Friedrich-Ebert-Stiftung (FES), “in an important sense it is the young people who have most to lose from environmental destruction; it is their future lifetimes that are being gambled away”.

Under the previous strategic plan that is now being retired, PACJA’s theory of change (ToC) was to empower and provide citizens with knowledge-based information on which they piled pressure on their governments to uphold principles of environmental and climate justice through laws, policies, programs and services.

PACJA has proactively used the mass and social media as tools for awareness creation. In the process, PACJA has initiated a number of media initiatives such as the African Climate Change and Environmental Reporting Award (ACCER), the Pan African Media for Climate Change (PAMAC), among others.

In addition, it has numerous other targeted tactics which have roped in the youth, women, pastoralists, faith groups, and parliamentarians, among others, into climate change advocacy discourses.

All these targeted tactics seem to have helped PACJA build a large momentum for climate change advocacy across Africa and the efforts have drawn interest from local and international support partners who include the UN agencies, major western countries and international development agencies.

However, according to Dr Mwenda, the experience of pursuing this theory of change over the past years is that, although CSO advocacy activities have contributed to policy dialogues, they have generally not yet achieved substantial policy change.

“Neither has public mobilisation had a significant influence on policy change among African governments,” he noted, adding that COVID-19 has even made things a lot harder.

So what informs the new strategic plan?

The overall goal of the 2021-2025 strategic plans is to ensure environmental and climate justice are a primary driver of sustainable growth and wellbeing for all people in Africa through mobilising and empowering African civil society.

According to Dr Mwenda, the new strategy will aim to see people “taste the fruit” of policy shifts towards sustainable economic and social development, particularly at such a time when governments will be embarking on post-pandemic recovery of massive job losses, business closures and conflict and insecurity, addressing basic needs will be imperative.

The new plan will focus on agitating for climate smart technologies, policies and investments that fuel green growth at the grassroots leading to sustainable growth and the wellbeing of the vulnerable driven by environmental and climate justice pathways.

“To do this sustainably means addressing the inequities and injustices that have been highlighted by the pandemic, including the environmental and social imbalances that underlay them, and the political and economic power structures that perpetuate those inequities and imbalances,” said Mwenda.

One of the voices at the opening of the event on Monday was that of the British High Commissioner to Nigeria, Catriona Laing.

Represented by Adesuwa Obasuyi of the Commission, she stated that the UK government would use the power of a fair and inclusive Presidency to bring governments, business, civil society and local communities together to drive action across key sectors of the economy to reduce emissions, mobilise finance, adapt and build resilience to the effects of climate change.

She added: “To achieve this, the UK’s COP26 Presidency is pushing for action around four goals: mitigation, adaptation, finance and collaboration to ensure the negotiations in Glasgow are a success.

“On negotiations, we want to agree a comprehensive, ambitious and balanced negotiated outcome that accelerates climate action and powers the process forward, including by resolving the outstanding elements of the ‘Paris rulebook’.

“In the run up to COP26, further progress is needed on NDCs and LTSs, as shown in the NDC Synthesis Report. Many major emitters have not yet submitted new plans, and many of the NDCs from major economies have fallen short of what is needed to meet the goals of the Paris Agreement.

“Continued submission of updated NDCs from smaller emitters including African nations helps to maintain the moral pressure on larger economies to increase their ambition and commitments to emission reduction. Net zero commitments also need to be backed up by long-term strategies (LTSs) submitted to the UNFCCC as per the Paris Agreement.

“The COVID-19 pandemic has made the poorest countries in the world more vulnerable still. However, in the context of COVID-19, there is an unprecedented opportunity to reboot global economies in a manner that builds more sustainable, inclusive and resilient societies.

“The benefits of tackling climate change are numerous and fundamentally in the interests of us all; amongst them: cleaner air, healthier communities, sustainable economic growth, energy security and a safer, more stable climate. However, we can only achieve the goals of the Paris Agreement if we all work together.

“We have just four months to go until COP26. Therefore, we need to move faster as we work towards a COP that will deliver for every one of us.

“We are grateful for the steps already taken by the PACJA and CSDevNet to organise dialogues like this and for on-the-ground action aimed at tackling climate change and charting a path for green recovery in Africa. At COP26, we count on your support for an ambitious outcome and helping the world’s most vulnerable to adapt to the impacts of a changing climate.

“We should all continue to work closely together multilaterally to tackle climate change. I trust today’s event will boost collaboration and prepare stakeholders for a meaningful engagement at COP26.”

“The benefits of tackling climate change are numerous and fundamentally in the interests of us all; amongst them: cleaner air, healthier communities, sustainable economic growth, energy security and a safer, more stable climate. However, we can only achieve the goals of the Paris Agreement if we all work together.

“We have just four months to go until COP26. Therefore, we need to move faster as we work towards a COP that will deliver for every one of us.

“We are grateful for the steps already taken by the PACJA and CSDevNet to organise dialogues like this and for on-the-ground action aimed at tackling climate change and charting a path for green recovery in Africa. At COP26, we count on your support for an ambitious outcome and helping the world’s most vulnerable to adapt to the impacts of a changing climate.

“We should all continue to work closely together multilaterally to tackle climate change. I trust today’s event will boost collaboration and prepare stakeholders for a meaningful engagement at COP26.” 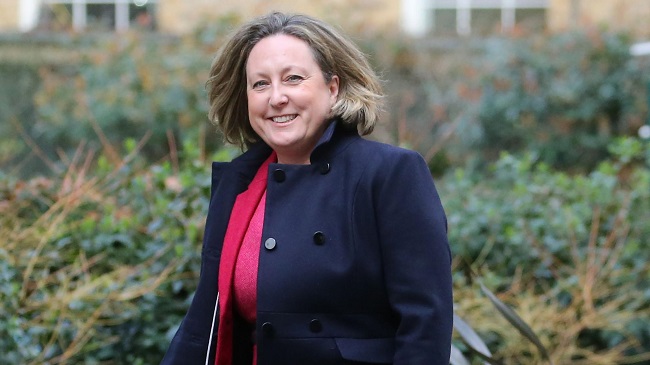 The UK held the second virtual Africa Investment Conference on Thursday, January 20, 2022, to ...