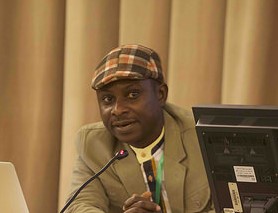 The award ceremony, which was graced by key representatives from UN bodies, African group of Negotiators, IUCN, media fraternity, government and civil society, saw 13 journalists from across Africa awarded because of their outstanding reporting on climate change and environmental issues.

In his opening remarks James Murombedzi, Officer in Charge, African Climate Policy Centre said: “While many journalists and editors may be interested in covering climate change issues, competition for space with other topical issues such as politics combined with unwillingness of the commercial-oriented media owners makes up a huge obstacle. Therefore, the ACCER Awards is a great initiative aimed at improving the African Narrative on Climate Change which is key in ensuring that Climate Change is given the human face about vulnerabilities faced by the African people.”

Mithika Mwenda, the Secretary General of the Pan African Climate Justice Alliance (PACJA), stressed its efforts in telling the African narrative on climate change, saying: “PACJA will continue to play a catalytic role in nurturing innovative ideas necessary for the transformative society as we desire to effectively confront the main challenges of 21st century. These complex challenges, such as climate change, will require collaboration from various stakeholders to defeat. And that is the spirit the ACCER Awards exemplifies.”

In a keynote address, Dr. Justus Kabyemera of the African Development Bank (AfDB) laid emphasis on improving journalists reporting on climate change issues, noting: “It is important to devise strategies to bring journalists and media practitioners to the forefront, not as reporters, but as key partners and players in the ensuing engagements.

“We appreciate PACJA for initiating a very innovative award scheme, ACCER Awards, which will indeed improve the African Narrative on Climate Change.”

Other speakers who spoke during the Awards Ceremony include: Ms. Catherine Mungai of the Climate Change and Food Security Programme; Ms. Jennifer Mohamed-Katerere, the IUCN Africa Counsellor; and Dr. Estherine Lisinge-Fotabong, of the NEPAD, who stressed the need to simplify climate change information to enhance awareness among communities and help develop concrete interventions in addressing climate change in Africa.

In the Print Media English category, Andrew Mambondiyani (Zimbabwe) was announced the winner with Mugerwa (Uganda) as the first runners up and Atayi Babs Opaluwah (Nigeria).

In the Print Media French category, AddehMidadji Daniel (Togo) was announced the winner and Madafime Didier Hubert (Benin) as the first runners up.

In the Electronic Media English, TV English category, Mercy Adundo (Kenya) was announced the winner and Aaron YanchoKaah (Cameroon) as the first runners up.

In the Electronic Media, Radio English category, Diana Wanyonyi was announced the winner and Ngala Killian Chimtom (Cameroon) as the first runners up.

The Judges noted that few entries were received in the Photojournalism category and therefore stressed the need for journalists to improve their reporting in this category. Nicodemus Kioko Kivandi (Kenya) was announced the only winner under this category.

Andrew Mambondiyani (Zimbabwe) was celebrated as the Overall winner with a story titled: “Summer, a season of suffering in Mozambique’s Beira.” As part of the award package, he was awarded $1,000 and will be supported to participate in the upcoming 22nd Session of the Conference of the Parties (COP22) of the United Nations Convention on Climate Change (UNFCCC) scheduled to take place on 7th-18th November, 2016 in Marrakech, Morocco.

All the winners, as well as first and second runners up in the various categories up will be trained for six months under The ACCER Awards Finalists Academy (TAAFA) as part of the enhancing their capacity on climate change and environmental issues to facilitate their reporting.