Nigeria is in the first group of A5 countries that want to replace HCFCs with ozone-friendly hydrocarbons, according to the Montreal Protocol. Innocent Anoruo was at a workshop in Lagos where stakeholders gave their nod to the treaty 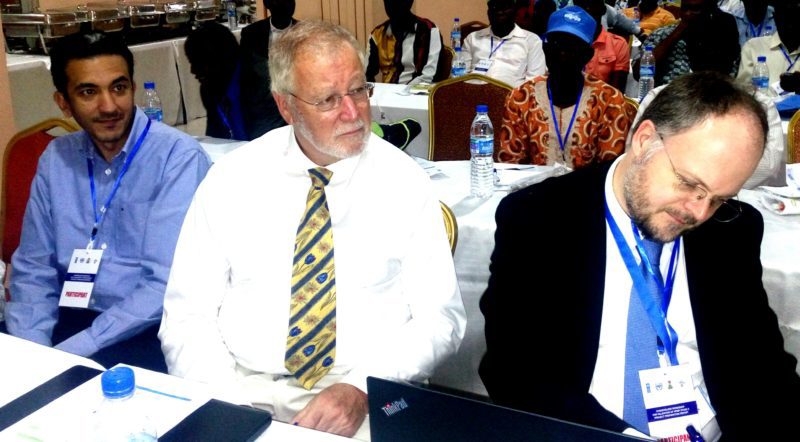 “We are here today to validate all the work we have done” to stop the depletion of the ozone layer, were the words of Mrs. Ozunimi Iti, United Nations Industrial Development Organisation (UNIDO) representative who came from Vienna, Austria, to attend the event.

In her goodwill message from the UN body at the Stakeholders’ Workshop for the Validation of Nigeria’s HPMP Stage II Proposal, Iti said UNIDO’s projects go beyond stopping the depletion of the ozone layer, to helping stakeholders adjust to new trends that protect the environment from dangerous gases.

The workshop that took place on Wednesday, July 26, 2017 in Lagos was attended by about 150 participants from Ministries Departments and Agencies (both federal and states), United Nations bodies, Refrigeration and Air-conditioning Services (RACS) industrialists and the media.

A view of participants at the workshop

The Hydrochlorofluorocarbons (HCFC) Phase-out Management Plan, or HPMP, for Nigeria was approved at the 62nd meeting of the Executive Committee (ExCom) of the Multilateral Fund (MLF) for the implementation of the Montreal Protocol, which will result in the complete phase-out of 407.7 ODP tonnes of HCFC in the country by January 1, 2040. United Nations Development Programme (UNDP) is the lead Implementing Agency (IA) while UNIDO is the Cooperating Agency (CA).

Declaring the workshop open, the Permanent Secretary, Ministry of Environment, Shehu Usman, urged the participants to brainstorm on the strategies for HPMP Stage II and make meaningful contributions for a quality document.

Represented by the Director, Pollution Control and Environmental Health, Charles Ikea, he said: “We have made considerable progress in the implementation of Stage I of the HPMP project. The Pilot Plant for the production of High Grade Hydrocarbon Refrigerants to be used as alternatives to HCFCs in the R&AC servicing sector has since been completed and commissioned in 2015.

“We are in the process of fashioning out ways of commercialisation of the plant. The System House project has also been completed this year, and we are preparing for commissioning of the project later next year.”

The Montreal Protocol (MP) on Substances that Deplete the Ozone Layer (a protocol to the Vienna Convention for the Protection of the Ozone Layer) is an international treaty designed to protect the ozone layer by phasing out the production of numerous substances that are responsible for ozone depletion. It was signed by 46 countries in September 1987.

Usman noted that the government of Italy has also offered to support the HPMP Stage II project as a bilateral partner, adding that all sectors will be continuously sensitised and engaged in the process, particularly the foam and RACS sectors. “We also encourage the acquisition of skills for refrigeration technicians and improve service delivery through the development of a certificate scheme for the technicians.”

He informed the participants that the Kigali Amendment was adopted at the 28th MOP to the MP in 2016 in Kigali, Rwanda. “By the amendment, HFCs, which are potent greenhouse gases are now added to the list of substances to be controlled under the Protocol. Parties agreed to cut the use of HFCs by 85 per cent by the late 2040s. First reductions by most developed countries are expected in 2019. Most developing countries will follow with a freeze of HFCs consumption levels in 2024.”

He re-affirmed the ministry’s commitment to the MP and its ODS phase-out programme.

UNDP Programme analyst, Montreal Protocol and Chemicals Unit, Etienne Gonin, disclosed that submission from the workshop would be submitted to MLF latest August 7, 2017 (Montreal time), for it to be discussed at the next meeting. “And we want it discussed,” he added.

Gonin said the production facility of the HC in commercial scale, which cost Egypt $5 million, may cost Nigeria up to $8 million. This, he told EnviroNews, is because of differences in production in different countries.

UNDP Senior Expert, Foams, Bert Veenendaal, added that the risk in the project is low, and that the process can be replicated anywhere in the world.

David Omotosho, fondly referred to as Father of Ozone, who came in from the United States for the workshop, said the phase-out strategic plan for the foam sector is expected to be approved by MLF between November and December 2017, and the conversion of thermo ware phases II and III in parallel up to February 2018. He added that the project is expected to be completed in 2021.

After a break, the stakeholders came back to demand that sensitisation should be taken to the grassroots, especially in the rural areas, who use these chemicals in their homes, not focusing only on industrialists.

However, Idris Abdullahi of the National Ozone Office (NOO) promised that when funding comes, “we plan to use task force to implement the Kigali Amendment.”

Before giving his vote of thanks, Abdullahi said the adoption of the Kigali Amendment “is a win-win situation for Nigeria, as we are aware of natural hydrocarbon sources for refrigeration.”

Countries like the Republic of the Marshall Islands and Mali have ratified the Kigali Amendment.

The Kigali Amendment was adopted in October 2016, and will enter into force on January 1, 2019 if 20 or more parties to the Montreal Protocol ratify it by that time.

Countries that ratify the Kigali Amendment commit to cut the production and consumption of HFCs by more than 80% over the next 30 years. It is expected that this will avoid up to 0.5° Celsius warming by the end of the century, while continuing to protect the ozone layer, according to UN Environment.