The Chairman, All Farmers Association of Nigeria (AFAN), Osun Chapter, Alhaji Sulaimon Araokanmi, on Tuesday, January 12, 2021 called on government to assist farmers with irrigation systems, to increase their productivity.

Speaking in Osogbo, the state capital, on the activities and challenges farmers faced in their operation in 2020, Araokanmi said lack of adequate rainfall affected the planting season such that their crops were lost in the ground, resulting in loss of food.

“COVID affected all sectors of the economy and country; the effect, however, was so severe on farmers and farming, and lack of rainfall made the situation worse.

“Even though we (farmers) were allowed to operate during the lockdown, most of the seeds and crops we planted did not germinate as they mostly died in the soil due to lack of rain.

“The rice, corn, yam, and others planted, dried up in the ground, due to lack of rainfall. And the situation was made worse because we don’t have irrigation systems in the state.

“We made efforts and planted some crops when we saw little signs of rainfall towards the end of the year, but it will take God’s mercies for food shortage not to hit the country, because our production capacity last year may not be able to sustain us in 2021.

“We usually eat from the harvest of the past year, but with the events of 2020 and without rainfall, there is no guarantee of enough harvest to sustain feeding in 2021,” Araokanmi said.

He added: “It is even bad for farmers in the Southwest, as we don’t have irrigation systems, and we solely depend on rainfall for whatever we plant to germinate.

The AFAN chairman called on the state government to create irrigation systems and make tractors available for farmers’ operations in the state, adding that government should also consider providing farmers with funds, grants and loans to boost their operations and productivity.

He noted that although the Federal Government had been doing a great job in boosting agriculture in the country, it should still assist in ensuring that its services and efforts reached farmers at the grassroots.

The AFAN chairman said this was necessary because politicians (political farmers) were prone to hijack government packages meant for real farmers. 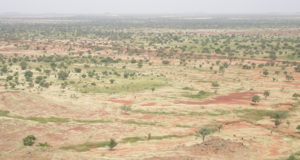 From dry to wet: Rainfall might abruptly increase in Africa’s Sahel

As this year’s rainy season gathers momentum, the Lagos State Government has allayed the fears ...