December 11, 2016 Comments Off on Optimism as Africa Adaptation Initiative shifts to Phase 2 950 Views

Following the successful implementation of the first phase of the Africa Adaptation Initiative (AAI), its promoters, amid a warm reception that greeted the landmark scheme in Marrakech on Thursday, November 16 2016, are preparing to kick-off the next phase. 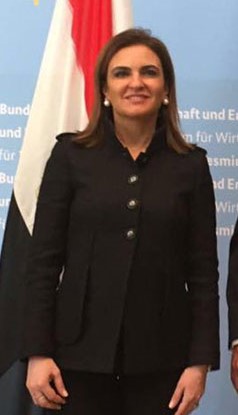 Yasmine Fouad, Egypt’s Assistant Minister of Environment. She says the AAI Phase 2 will span four years – beginning from next year and rounded up in 2020.

During a plenary on the AAI which formed part of the Africa Day at the UN climate change talks (COP22) that held recently in Morocco, Ms Yasmine Fouad, Assistant Minister of Environment for Sustainable Development & External Affairs of Egypt, disclosed during a presentation that Phase 1 of the AAI, which spanned between 2015 and 2016, had been successfully achieved.

“A political mandate from African Heads of State and Government and endorsement from all 54 African countries was given, the AAI was launched at COP21 in Paris, and two Technical Working Group meetings were held,” she said, listing the activities that held within the two-year period that the initial phase lasted.

Ms. Fouad added, however, that the project’s Phase 2 would span four years – beginning from next year and rounded up in 2020.

She said of the Phase 2: “The AAI will place a facilitative role, working with partners to scale up and replicate adaptation actions and approaches to address loss and damage. This phase will begin with facilitating support for African countries to development and implement National Adaptation Plans (NAPs) through a partnership with the United Nations Development Programme (UNDP).

“Additionally, AAI will develop a yearly report to map ongoing initiatives on adaptation and addressing loss and damage and assesses progress towards meeting the objectives.”

The Egyptian minister noted further that, under Phase 3 (2020-2030), “the AAI will continue to work with partners to facilitate the scaling up and replication of adaptation action and approaches to address loss and damage. Additional flagship programmes will be developed and additional resources will be mobilised,” she added.

ALSO READ:  Our expectations from post-2020 biodiversity negotiations, by CBD

Launched at COP21 in Paris by HE Abdelfateh Al-Sissi, the President of the Arab Republic of Egypt, the AAI is an African-led initiative rooted in existing African institutions. It aims to provide support to African countries to enhance adaptation action and address loss and damage on the continent with the aim of being transparent, flexible, agile, and responsive to the needs of African countries.

Participants at the session lauded the initiative, saying it would address the gaps and challenges as well as assist African countries enhance adaptation and address loss and damage.

Augustine Njamnshi of the Pan African Climate Justice Alliance (PACJA) said: “One thing we are happy about is that, before Paris, the industrialised world used to accuse Africa and least developed countries of demanding for money but having no avenues to spend them. But we now have where and how to spend the money, thanks to such great initiatives like AREI and the AAI that have been brought on the table. The time has come and we’ve proven that this is what we want to do.

“Our focus is to fight climate injustice, which happens when somebody is suffering from a situation he did not create and the person that has caused that situation either pretends not to know that you are suffering or they don’t know. So we brought the issue of climate justice on the table, and it was like utopian dream that can never be discussed on the table. I’m happy today that equity and justice has found a central place in these negotiations and any push to take it away from the people has been met with one force in Africa which is the African civil society network group.”

Mr. Seyni Nafo, Chair of the Africa Group of Negotiators (AGN), noted: “The AAI and AREI are all about Africa taking care of Africa, which is very commendable. The two main objectives of the AGN entail the early entry into force of the Paris Agreement, under which the aim is to strengthen the technical and operational foundations. The second is implementation and action.”