December 16, 2015 Comments Off on Opportunity, challenges ahead Paris Agreement, by CDKN 1,379 Views

As the world celebrates – and laments – the Paris Agreement, nations have been urged to immediately begin its implementation. According to the Climate & Development Knowledge Network (CDKN), the agreement is encouraging but if ambition does not continue to increase in future years, then the achievement of a 1.5- or even a 2-degree target – and many of the Sustainable Development Goals (SDGs) – will be in danger. 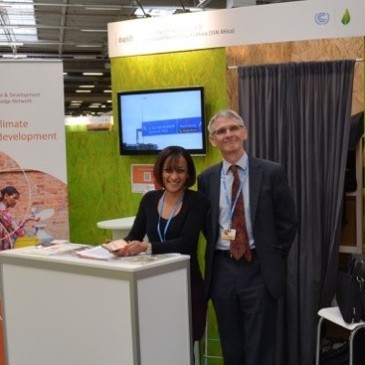 Sam Bickersteth, CDKN’s Chief Executive, stresses that the agreement’s significance for future development pathways for the least developed and most climate vulnerable countries – as an element of the SDGs – cannot be underestimated.

“Critically, it will increase the flow of additional public and private finance for vulnerable countries for both low-carbon and climate-resilient investments. Ambition, including the pathway towards a possible 1.5-degree limit and five-yearly reviews, will be played out through the national climate plans (the INDCs),” he says.

The CDKN’s global, regional and country team leaders reflect on the opportunity and challenges ahead.

Kiran Sura, CDKN’s Head of Negotiations Support: “The Paris Agreement has delivered a universal and ambitious plan to halt dangerous climate change. This is an historic moment for the world and a life line to those climate-vulnerable countries and small island states on the front line of climate change. However, it is now up to us all to grab this life line and deliver the action needed to meet the challenging target of limiting warming to 1.5oC and provide the international support climate-vulnerable countries need to protect themselves against the impacts we have already locked in. The Presidency’s skilful handling and diplomacy has not only ensured a deal was delivered but also that all voices – especially those of the poorest and most vulnerable that are often not so loud – were heard. Merci, Paris.”

Geoff Barnard, CDKN’s Senior Knowledge Management Advisor: “The Paris Agreement is a much-needed shot in the arm for everyone who has been working to champion climate issues, ever since the disappointments of Copenhagen.  From exhausted negotiators to passionate civil society activists, the relief coming out of Paris is palpable. The hugging and whooping in the Conference Hall spoke volumes for the emotional response of many around the world who have put their combined shoulders to this huge and heavy wheel, which at times has felt hopelessly mired in disagreements and wrangling.  The wheel is finally moving, and the elation that so many of us feel is testament to the passion and commitment that has underpinned all the hard work up to now. There is a great deal more work to be done, starting today.  But let’s celebrate this moment of jubilation in Paris, and cherish the inspiration it provides us for the long road ahead.”

Mairi Dupar, CDKN’s Global Public Affairs Coordinator: “Congratulations to the governments who rose above their differences in Paris and responded to climate experts’ warnings about the dangers of a 2-degree world. They have recognised that radical action on climate change is needed to achieve the Sustainable Development Goals and protect the lives and prospects of the world’s poorest people.

“Reining in dangerous levels of warming calls for astonishing reserves of human ingenuity – but this effort does not happen in a void. CDKN is among the many alliances that have already been trying and testing approaches to climate compatible development for several years: approaches to curbing emissions while achieving greater climate resilience and human development. CDKN doesn’t have all the answers, but we are committed to sharing best practices as well as beautiful failures; we do this in our new book ‘Mainstreaming Climate Compatible Development’, which summarises the first five years of CDKN’s experience. We hope others will join us in this spirit of expanding and strengthening knowledge networks, to empower everyone for the opportunities and challenges ahead.”

Carl Wesselink, CDKN’s Regional Director for Africa: “The Paris Agreement is both a big step forward and a frustrating shortcoming. Its success will depend on the implementation of voluntary INDC targets. For African countries implementation will require more refined strategies and innovative finance.  Realising low (avoided future) emission development strategies will be a priority across the continent, and the sooner the better. Countries with heavy fossil-fuel use will need to grapple with the implications for their economies. The increased climate finance pledges, and particularly adaptation aid, is a victory but will fall short of the need. The financial implications of the loss and damage clause are still to be determined, and Africa will participate keenly in that process.”

Revocatus Twinomuhangi, CDKN’s Senior Strategic Advisor for Uganda: “The new global climate agreement adopted in Paris represents important progress towards addressing the climate change that is currently threatening human survival on this planet. For the least developed countries are that a highly vulnerable, the Paris Agreement brings hope for accessing climate finance to invest in adaptation that will build climate resilient economies, communities and ecosystems. In particular, the establishment of a technical and knowledge platform under the Nairobi work programme on impacts, vulnerability and adaptation to climate change is crucial for capacity building. By supporting country-owned and country-driven adaptation actions, the implementation of the Agreement will contribute to poverty reduction, which is crucial to building climate resilience and ensuring sustainable development. It is time to build on this momentum to work for the achievement of the global SDGs.”

Connie Espinosa, CDKN’s Regional Director for Latin America and the Caribbean: “For the Latin American and Caribbean Region, the Paris Agreement rises above the different views of sub-regional groups towards a common objective for a low carbon and resilient future. We celebrate this historic moment and acknowledge the trust our governmental leaders have put in an organised and cooperative international context that will facilitate climate finance to our region. We are proud of the three Latino figureheads who paved the road towards the Paris Agreement: the Peruvian Minister of Environment, Manuel Pulgar Vidal, responsible for the 20th COP Presidency and who worked for achieving consensus among Parties. The Argentinian Pope Francisco with the presentation of the encyclical “Laudato Si” on climate and environment and by directly talking with Presidents and mayors for their support to achieve an Agreement; and finally, Christina Figueres from Costa Rica, as Executive Director of the UNFCCC, who orchestrated all the support needed for negotiations to happen.”

Claudia Martinez, CDKN’s Senior Strategic Advisor for Colombia: “After the excitement of the signature of the Paris Agreement, Ban Ki Moon stated that “we shall all stay united and bring the same spirit to the crucial test of implementation”.  The Paris Agreement sets for the first time a long term goal for every country that has committed to achieve its INDC.  In the case of Latin America and the Caribbean, our overall emissions account for 11% of the world’s emissions, mostly related to deforestation and land use change followed by energy including transport.  But in this emerging region, the trend is to shift to more carbon–intensive economies looking similar to the current developed economies. In a business as usual scenario, countries could increase the use of energy and transport increasing their emissions share by 50 % according to the Inter-American Development Bank (IADB). After Paris the challenge is to grow and decarbonise our economies at the same time.”

Ali Sheikh, CDKN’s Regional Director for Asia: “At the heart of Paris Agreement is the process and mechanism to increase the ambition as part of periodic reviews. The nations will meet every five years to revise their national action plans or what is generally known as the INDC. CDKN can have a genuine pride in having catalysed and fostered the INDC process in many, many ways – ranging from helping some countries develop their distinct contributions by adapting unique methodologies and internal processes, by supporting research and investments in methodologies, by developing toolkits for least developed countries and by supporting their participation in a wide range of capacity building and training exercises. CDKN has also galvanised support for INDC implementation, which we hope will serve as an important building block for the implementation of the historic Paris Agreement.”

Munjurul Khan, CDKN’s Senior Strategic Advisor for Bangladesh: “Adoption of the Paris Agreement is a historic landmark achievement of the global community. This Agreement created an opportunity to limit the temperature increase to 1.5 °C above pre-industrial levels by taking into account of the objective of the Convention, and being guided by its principles, including the principle of equity and Common But Differentiated Responsibility (CBDR) and Respective Capabilities (RC), in the light of different national circumstances. Inclusion of human rights and climate justice in the Agreement shall provide scope for stronger argument for demanding climate action for vulnerable. However, the non-punitive nature of compliance measure may be a serious limiting factor for implementation of the Agreement.”

Ari Huhtala, CDKN’s Deputy CEO and Climate Finance Lead: “The Paris Agreement sets a target for financial commitments from developed countries, but it is important to remember that what is needed for the required transformational change is trillions, not billions. The floor of $100 billion per annum should be used as a catalyst to accelerate the shift of all resource flows towards climate compatible options. Meeting this commitment is doable, fossil fuel subsidies alone amount to significantly more and carbon pollution can and should be priced. Instead of only tracking flows from developed to developing countries, we should focus on ensuring the effectiveness of the committed funds, and support developing countries in that endeavour.”

Jebi Rahman, CDKN’s Partnerships and Networks Programme Manager: “The Paris Agreement resonates with CDKN’s strong partnership work to date, and the task ahead to continue forging knowledge networks at the subnational, country, regional, and global levels. Partnerships will be needed at all these levels to create the disruptive change required for enhanced pre-2020 action by developing country Parties.  Much work needs to be done to innovate, share lessons learned, and support capacity development, before reviewing and ratcheting up ambition in the next five years.  The road ahead is long, and I look forward to continuing with colleagues and partners, old and new, on this journey.”