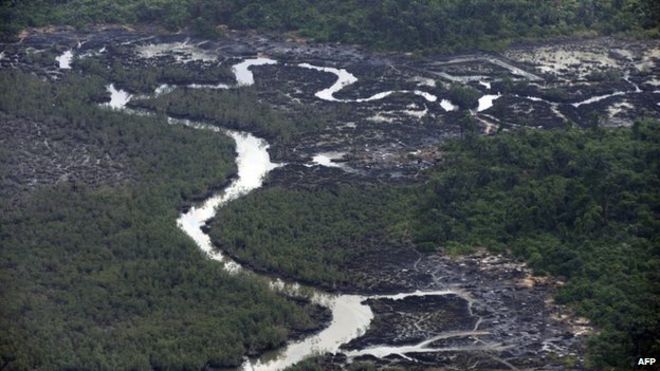 This is because the indigenes of the affected five communities and fishing settlements are increasingly unable to eke out a living as fishing and farming activities have been grounded to a halt, amid the threat of water poisoning. The facility is owned by the Nigerian Agip Oil Company (NAOC).

It was gathered that while the under water leakage was discovered by fishermen close to the Brass River, the surface leakage was unveiled in the mangrove forest located a mile away from the Nembe Road.

A joint inspection team of local indigenes and concerned environmental groups led by ‎the Coordinator of the Niger Delta Development Monitoring Group and former Chairman of Nembe Oil and Gas Committee, Nengi James, and the Public Relations Officer of the Sabatorou Youth Group, Justice Andrew, visited the sites of the spillages.

James, who confirmed the development, said the visit to the sites of the leakage was to get video and pictorial evidence. “The team suspected that the spillage occurred some days before discovery by indigenes. And Agip is yet to attend to the cries of the communities. The spillage has stopped aquatic and farming activities,” he said, adding:

“Agip has refused to do containment and clean ups. We are calling on government and appropriate organisations to condemn the attitude of Agip to the host communities. We also recommend that the damaged pipelines be replaced and necessary compensation paid to indigenes of affected communities.”