November 26, 2015 Comments Off on Ogoni youths graduate from Shell-sponsored training for farmers 1,165 Views

A total of 60 youths from Ogoniland on Tuesday graduated from a training programme on agricultural entrepreneurial programme organised by The Shell Petroleum Development Company of Nigeria Ltd operated Joint Venture in an effort to introduce youths in the area to viable means of livelihood. 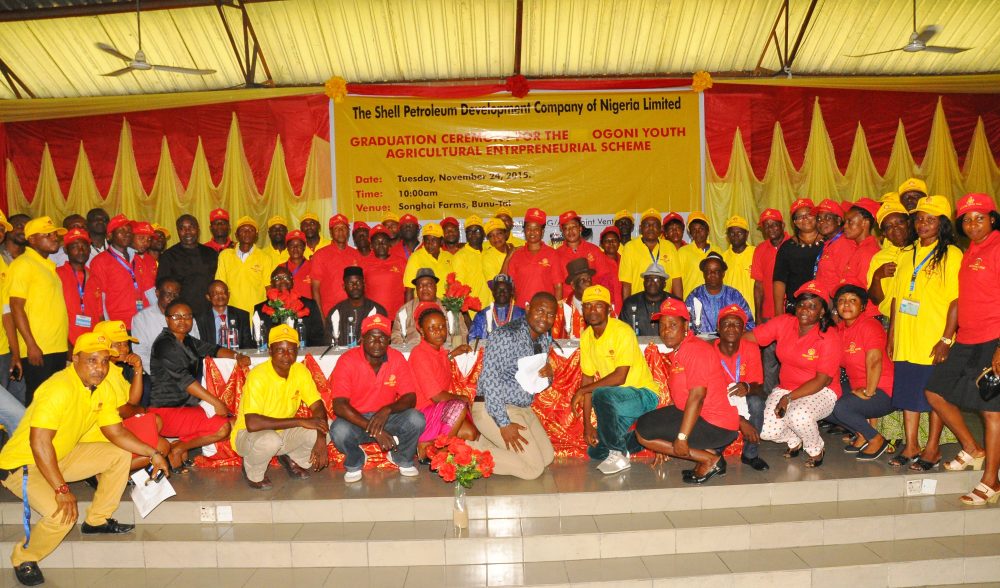 The youths from the four local government areas in Ogoniland – Tai, Khana, Gokana and Eleme – received the four-week training at the Songhai Farm at Bunu-Tai, where they learnt vital skills in fishery, cassava production and poultry farming.

“The training is key first step towards making Ogoni youths self-reliant and eventually become employers of labour,” said SPDC’s Ogoni Restoration Project Manager, Vincent Nwabueze, at the graduation ceremony. “We urge the new entrepreneurs to work hard and be steadfast in their various enterprises irrespective of any initial challenges that may confront them.”

King Godwin Giniwa, the Gbene Mene Tai and President, Supreme Council of Ogoni Traditional Rulers, said: “I want to thank Shell for what they are doing. They should continue to do more, especially to touch the lives of the people, because we are partners.”

The Director of Youth Enterprise Development and Promotion in the Rivers State Ministry of Youth Development, Mr. Festus Ugwuzuo, said that the agricultural training initiative of the SPDC JV under the Ogoni Youth Entrepreneurial Scheme has come at a time when there is growing need to diversify Nigeria’s economy. Brian Udoh, the training officer of Songhai Farm Rivers State said that the 60 trainees recorded 85 per cent success in the programme, which has equipped them to maximise the full value chain of each of their areas of specialisation.

Representatives of the trainees, Jane Jiala, Nkiken Nwafor and Hanson Nwidobie, thanked SPDC and their trainers for the opportunity given them to make a difference in their lives.

The trainees were given funds for land preparation, business take-off and implements relevant to their trades. Another payment will be made to them when their businesses have taken off. Using the findings of a baseline survey, SPDC JV designed the agricultural programme to include links to market and credit facilities as well as mentoring and monitoring services for the beneficiaries. As a result, SPDC JV has retained the services of consultants to mentor the young farmers for one year during which the first harvest and sale of crop and livestock would have taken place. At the end of the first year, the scheme beneficiaries will then be managed as part of the public agricultural extension services delivery.

Early this year, another set of 105 Ogoni youths graduated from Shell’s flagship entrepreneurship programme, LiveWIRE, which was extended to Ogoniland in 2014, with the objective of raising living standards and reducing crude oil theft through the promotion of alternative livelihoods