The United Nations Office for the Coordination of Humanitarian Affairs (UNOCHA) says the humanitarian crisis in Nigeria’s northeast is still critical due to ongoing hostilities. 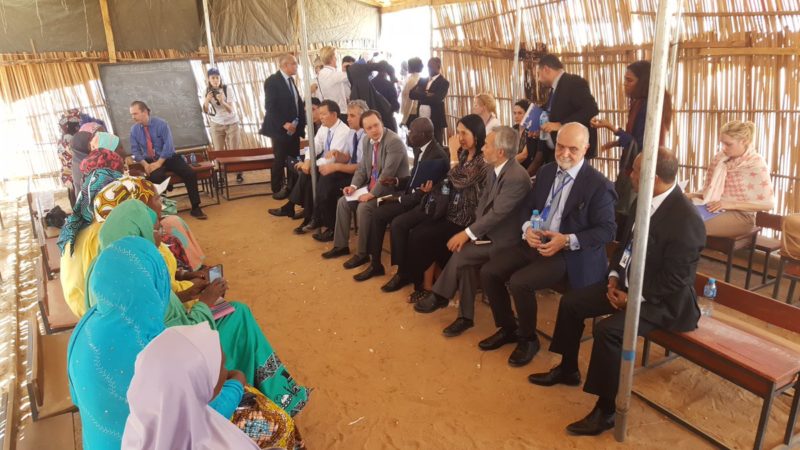 UN Security Council members in a meeting with internally displaced persons (IDPs) in Maiduguri, in a bid to getting first hand info on their challenges

UNOCHA stated this in its monthly humanitarian update report made available to the News Agency of Nigeria (NAN) on Thursday, March 1, 2018 in Abuja.

According to the report, the humanitarian crisis in the region, now in its ninth year, remains massive in scale due to the unending hostilities and incessant attacks by the Boko Haram insurgents.

It stated that the food security situation remained extremely bad as the conflict continued to limit the amount of land under cultivation with 3.7 million persons expected to face critical levels of food insecurity.

The report added that food insecurity would be experienced in the upcoming lean season starting from June to September.

It further disclosed that 1.7 million persons were still internally displaced and human rights violations continued to be reported daily.

It stated that additional displacements were expected as long as hostilities continued.

Furthermore, it stated that information from newly arrived persons indicated that more families were in areas difficult to access by international humanitarian workers.

“Between October 2017 and January 2018, over 40,000 vulnerable persons have been on the move for various reasons including ongoing hostilities, improved security in certain areas and poor living conditions.

“While assessments are still ongoing in these hot-spot areas, rapid assessments and gap analyses have been developed.

“Initial findings show that thousands, including host communities, are in dire need of food, water, shelter, blankets and clothes, and medical care.

“A multi-sectoral response has been possible through the rapid response mechanism and humanitarian organisations have scaled up their advocacy and resource mobilisation activities in order to meet the needs of the affected people.

Humanitarian access continues to present major challenges, especially in Borno with about 926,000 persons still in areas that are hard to reach for international humanitarian organisations.

It added that aid workers were working to expand the humanitarian space in the northeast through civil-military coordination and community engagement.

The report stated that to improve local coordination, assistance and to increase the presence of humanitarians where vulnerable populations reside, five ‘deep field’ humanitarian hubs offering secure accommodation and Internet connectivity had been made operational.

It identified the five areas as Maiduguri, Ngala, Dikwa, Bama and Gwoza, adding that another three – Monguno, Damasak, Banki – would be fully operational this month with an additional one by April in Rann, bringing the total to nine.

The report also pointed out that 2017 recorded many positive developments such as the containment of the cholera crisis in Borno and the establishment of five humanitarian hubs in the field.

It listed other achievements to include the roll-out of a local coordination mechanism and many sectors reaching their targets overall.

It, however, noted that without sustained assistance, all gains could be lost and the situation could quickly deteriorate.

ALSO READ:  How CODE is mainstreaming advocacy communication for citizen engagement in governance

It stated that the 2018 response would also focus on durable solutions, early recovery, livelihoods and basic services rehabilitation, across all sectors, to support a multi-year vision that goes beyond saving lives today.

“A total of 60 organisations have committed to implementing 173 projects aimed at providing life-saving assistance to 6.1 million women, children and men in Borno, Adamawa and Yobe states.

“Most partners were able to continue to provide life-saving assistance in January thanks to about 196 million dollars carry-over funding from 2017,’’ the report stated.

It added that for the response to be sustainable and to avoid interruption in life-saving services, it is crucial that additional funding be received across all the sectors.