The Team Leader, Wheat Value Change in Nigeria, Dr Oliwasina Olabanji, says that Nigeria will reduce wheat importation by 60 per cent by 2025. 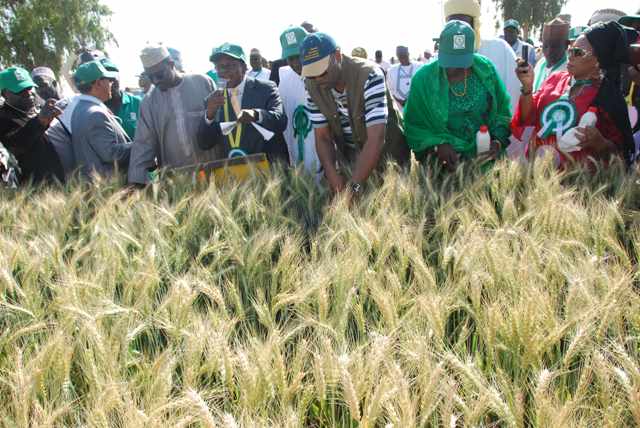 Olabanji, who is the Executive Director, Lake Chad Research Institute, stated this on Sunday, April 8, 2018 after inspection of wheat seed production farms in Ringim and Hadejia Local Government Areas of Jigawa State.

He explained that the Flour Mills had initiated and supported the production of improved and high yielding wheat seed in Jigawa and Kano states.

The team leader said the firm has supported farmers with seed and fertiliser to cultivate 45 hectares of the improved seed, with 30 hectares in Kano and 15 in Jigawa.

According to him, seed is critical to crop production, hence the need to support and encourage its production.

Olabanji identified lack of adequate seed as a major challenge in the value change agenda in Nigeria.

“We are here today for a farm work on wheat seed production. This project is the initiative of Flour Mills of Nigeria; they empowered our farmers with inputs to produce wheat seed.

“Seed is very critical in crop production and in the value change, our major challenge is seed, we don’t have adequate seed in this country, not only for wheat, even for most crops.

“But the Flour Mills of Nigeria has in no small measure helped us to bridge the gap in our seed production. They have intervened in two states – Kano and Jigawa.

“Here in Jigawa, they empowered three farmers to cultivate 15 hectares of wheat seed, likewise in Kano, about 30 hectares have been put into wheat seed production with support of the company.

He added that the farmers engaged to produce the seed were competent enough and were trained on community based seed production.

The team leader also assured the farmers that the company would uptake the seed after cultivation.

“And another thing that the Flour Mills is going to do now is when the farmers harvest is to buy from them. So farmers already have market.

“And I want to thank the state’s Director of Agricultural Transformation Agenda (ATA), Malam Isa Awwalu, for his support in the programme,” the team leader added.

According to him, the wheat value change team will soon come up with another project in which wheat seed production is a component.

Olabanji added the team would collaborate with Jigawa Government to make sure that, by 2025, Nigeria reduces importation of wheat seed by sixty per cent.

“So we are coming to sensitise Jigawa government on the project so that we will have a very strong collaboration to make sure that come 2025, Nigeria must reduce importation of wheat by 60 per cent,’’ Olabanji said.