According to a statement posted on the WHO Regional Office website, the attainment of polio free status had not debar Nigeria from increasing its efforts on polio vaccination.

“Nigeria in collaboration with other partners is leaving no stones unturned in making sure that all forms of poliovirus are no longer circulating in the country.’’

According to the statement, the last case of wild poliovirus (WPV) in the country was reported in Borno State in Aug. 2016.

On Aug. 25, 2020, Nigeria, through the sustained and concerted efforts of the government, WHO and other partners, joined the leagues of countries certified wild polio-free which culminated in a wild polio-free African Region.

However, the UN health agency said the battle against all forms of polioviruses in the country was yet to be over.

“It is not over as Nigeria is still battling with the circulating Vaccine Derived Polio Virus type 2 (cVDPV2) and there is need to sustain the immunisation coverage all over the country to halt transmission.

“To sustain the gains of polio eradication in the country, WHO has been working with the Borno State Government in implementing vaccination and surveillance activities in hard-to-access, security-compromised areas of the state.

“The effort is to sustain the momentum gained from the polio eradication programme.

“Also to maintain vaccine availability to the children in the area as vaccination and surveillance accessibility was the main issue in 2016 when the wild polio cases were detected in the state.’’

In Borno State, especially during the COVID-19 lockdown, the teams – comprising personnel from WHO as well as State and Community Informants in Inaccessible Areas – continued immunisation and surveillance activities in the hard-to-access settlements in the state.

Through these efforts, the teams have been able to ensure that AFP cases are identified and children vaccinated against polio and other vaccine-preventable diseases.

Although there have been cases of AFP reported from insecure areas in the state, they were, however, classified as negative for wild polio and cVDPV2 after investigations and processing of stool samples by the WHO accredited national laboratories.

The epidemiological report showed that, at the end of week 42, 2020, a total of 117 Acute Flaccid Paralysis (AFP) cases have been notified and investigated from 64 security compromised wards of 20 Local Government Areas (LGAs).

According to WHO, the inability to access some settlements in Borno State due to the conflict had presented a challenge to the immunisation programme.

However, it stated that based on the new grounds covered in the past few months, there had been increase in surveillance and vaccine reach in the insecure areas.

“1,212 of these geo-locations were previously unreached for surveillance and by any other intervention.

“Also, 1,009 of the 1,212 previously unreached locations were reached with polio vaccines in addition to polio surveillance through vaccination activities by CIIA.

Among the newly reached areas in the last three months (July-September 2020), 72 of the settlements are in Bama LGA.

Commenting on the improvement in surveillance and vaccination reach in the state, the WHO State Coordinator in Borno, Dr Musa Audu, says: “Bearing in mind that Borno was the last sanctuary of wild polio transmission in Africa.

“They are leaving no stone unturned to ensure the state and Nigeria at large remains polio-free.

“This is being done by consolidating on all innovations that were implemented that led to the eventual eradication of polio.”

According to Audu, they have been able to gain access to new grounds through the efforts of the informant network in insecure areas.

“We have made progress in establishing sustained surveillance in insecure areas.

“As at 16th October, 387 (36 per cent) settlements out of the previously unreached 1,083 settlements as at the time of ARCC visit to the state in March 2020 have been accessed by the programme with valid geo evidence.

“This is a testament that we are not relenting in our efforts in spite of being certified polio-free,” he said. 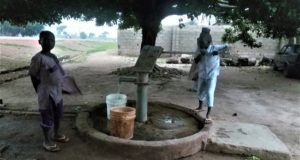