Minister of State for Health, Dr. Osagie Ehanire, has urged the global community to promote guidelines and international cooperation that will protect public health policies from commercial interests of tobacco companies. 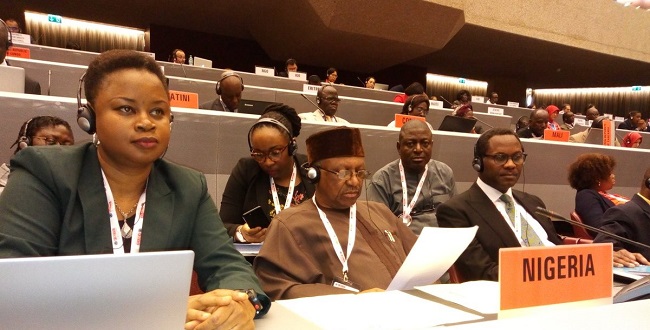 Ehanire, who spoke at the ongoing Eight Conference of Parties of the World Health Organisation Framework Convention on Tobacco Control (WHO-FCTC) holding in Geneva, Switzerland, disclosed that Nigerian has in the past few years made significant progress in tobacco control.

The minister said: “Through multi-sectoral engagements involving Government and Civil Society Organisations, the Nigerian government has begun mass awareness campaigns on provisions of the National Tobacco Control Act 2015, to create the enabling environment for enforcement.

“Nigeria is strongly desirous of protecting its citizens, particularly the youths, from reckless access to tobacco products. We therefore adopted the regional Economic Community of West African States (ECOWAS) directive on harmonisation of excise duty on tobacco products in Member States, and revised excise tax regime on tobacco products from 16% to 23.2%. This is to be further reviewed upwards over the next two years, as we work with our regional ECOWAS block, towards meeting the WHO recommended excise tax level corresponding to 70% of retail price of tobacco products.

“The Nigerian government has reviewed the Standards for Cigarettes to include the complete ban on cigarettes with characterising flavour, including menthol.  Nigeria ratified the Protocol to Eliminate Illicit Trade in Tobacco Products. The instrument of accession will be finalized and deposited at the UN Headquarters imminently.”

On concerns that tobacco multinationals are conducting covert activities to undermine tobacco control activities across the African region, the minister disclosed that Nigeria is strongly committed to the sanctity ofits tobacco control policies.

“I am pleased to announce that every member of the Nigerian delegation at this COP8 meeting signed the Declaration of Conflict of Interest (DOI) form, which shall be made available to the COP Secretariat. This is to be Nigeria’s practice for all subsequent COPs,” the minister proclaimed.

The minister, who also spoke on the linkage between tobacco control and climate change, explained that tobacco growing leads to deforestation due to land clearing, cutting of trees for curing of tobacco leaves, contamination due to extensive pesticide use, among other factors. He invited collaboration with the international community in promoting sustainable environment against the negative impacts of tobacco farming.

Following from the ministers’ speech, the Framework Convention Alliance (FCA) which is a global alliance of NGOs working to achieve the strongest possible FCTC has awarded Nigeria the orchid award for making a strong statement on its intent to fully implement the FCTC, including its support for the Global Strategy and transparency of delegations, among others.

In a related development, the Federal Government has renewed its commitment to reduce the use of tobacco in the country.

Mrs Boade Akinola, the Director, Public Relations in the Ministry of Health, made the submission on behalf of the Minister of State for Health on Wednesday, October 3, 2018 in Abuja at a public awareness forum on the dangers of tobacco consumption.

According to him, efforts had been made towards the implementation of the National Tobacco Control Act (NTCA) of 2015.

NTCA is a domesticated WHO Framework Convention on Tobacco Control (FCTC).

Ehanire said government had began mass awareness campaigns on the provisions of the NTCA 2015 to create the enabling environment for enforcement in collaboration with Civil Society Organisations.

He said government had reviewed the standard for cigarettes to include the complete ban on cigarettes with characterising flavour, including menthol.

The minister also announced that government had ratified the protocol to eliminate illicit trade in tobacco products, adding that the instrument of accession would be finalised and deposited at the UN headquarters.

Ehanire pointed out that tobacco farming leads to deforestation due to land clearing and curing of tobacco leaves, it also increases land and water contamination due to extensive pesticide use, among others.