Nigeria’s aspiration for the vice presidency of the United Nations Environment Assembly (UNEA) received a major boost on Monday as the sixth session of the African Ministerial Conference on the Environment (AMCEN) got underway. 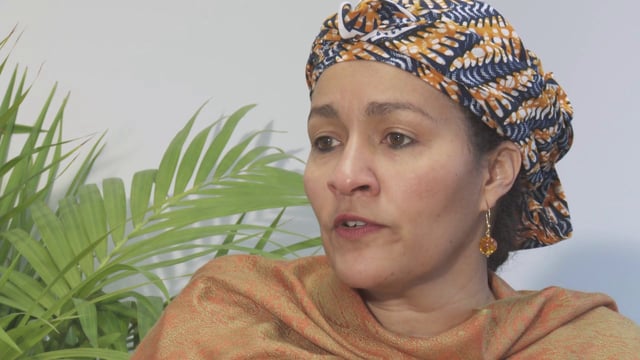 Nigeria’s Environment Minister, Mrs Amina Mohammed, is hoping to be one of the two UNEA  vice-presidents from Africa. Photo credit: i.vimeocdn.com

Speaking to over 40 ministers of the environment and heads of country delegations at the forum, Ibrahim Usman Jibril, Nigeria’s Minister of State for Environment, who represented the senior minister, expressed the country’s delight to present Mrs. Amina Mohammed for nomination as one of the two Vice Presidents from Africa on the bureau of the UNEA 2.

Alhaji Jibril hinged his senior minister’s nomination on her eminent status as one of the architects of the Sustainable Development Goals (SDGs) and her focal commitment to the African cause in the global effort to achieve sustainable development as well as the environmental dimension of Agenda 2063.

The Minister of State further expressed Nigeria’s support for the AMCEN process aimed at presenting a unified African position at the forthcoming UNEA2, May 2016 year in Nairobi, Kenya.

Nigeria, according to him, believes that the African Renewable Energy Initiative (AREI) and the African Adaptation initiative (AAI) are veritable tools for sustainable development on the continent in the near future.

“Nigeria considers building capacity and retooling the youths of Africa through education and employment as a necessary and urgent requirement for sustainable development in Africa. The continent is well endowed with enormous human resources and is still growing. We should invest in this precious resource for Africa’s renaissance,” he said.

Welcoming the Paris Agreement and encouraging its implementation especially as it relates to African realities taking into account respective nationally determined contributions, Nigeria called for investments in Africa’s green growth as a catalyst to achieving the climate SDGs and the Agenda 2063.

On their own part, the African Civil Society Coalition under the aegis of the Pan African Climate Justice Alliance (PACJA) believes that UNEA should be the rallying point for Africa’s environmental consciousness, and called for all stakeholders to continue supporting UNEP-RoA which hosts the AMCEN Secretariat.

Over time, UNEP RoA has distinguished itself as the centre of action in environmental discourses in Africa.

UNEA was formed following a call by world leaders at the UN conference on Sustainable Development (Rio+20) in Brazil in June 2012. The aim of the UNEA is to strengthen and upgrade UNEP as the leading global environmental authority that sets the global environmental agenda and by establishing universal membership in its Governing Council – a 58-member governing body of UNEP in place since 1972.

In March 2013, the General Assembly adopted resolution A/RES/67/251 that formally changed the name of the Governing Council to the United Nations Environment Assembly.

Now all 193 UN member states, observer states and other stakeholders participate in discussions and decision-making on issues that affect the state of the environment and global sustainability.

As the new governing body of UNEP, UNEA has the mandate to make strategic decisions, provide political guidance in the work of UNEP and promote a strong science-policy interface.