A huge cloud of uncertainty is hanging over the much-vaunted Nigerian REDD+ (Reducing Emissions from Deforestation and Forest Degradation) Programme following the arrest a couple of days ago in Calabar, Cross River State of long-serving and erstwhile chairman of the Cross River State Forestry Commission (CRSFC), Mr Odigha Odigha. He has since been released on bail. 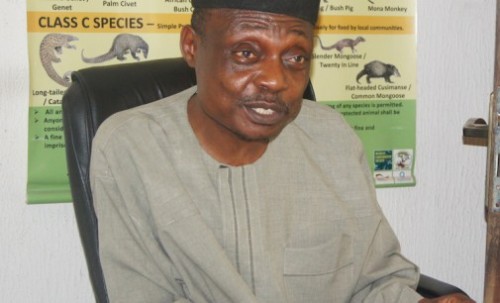 Educator, environmentalist and activist, Odigha Odigha was awarded the Goldman Environmental Prize in 2003, for his efforts on protection of the rainforests of Cross River State from industrial logging. Photo credit: climatereporters.com

Feelers indicate that new Cross River State governor, Prof Ben Ayade, ordered the arrest of Odigha, along with three directors of the CRSFC in order to pave way for the takeover of the state-owned massive forest reserve – upon which the concept and ideals of the REDD+ Programme is based – by a Chinese firm for exploitation.

Regarded as one of the largest forest blocks remaining in the West African region, the Cross River Forest Reserve covers 312 square kilometres. It lies between the Afi Mountain Wildlife Sanctuary and Mbe Mountains Community Forest, both of which are home to Cross River gorillas, and form a corridor between the two.

An official of the Commission disclosed that the state governor had concessioned the forest to a Chinese paper producing firm and that, going by the terms of agreement, the Cross River forest would be considerably exploited – a policy that Odigha had dedicated is life to over the decades, and prompting the United Nations REDD+ Programme to select the reserve as a pilot site for the programme in the country.

An educator, environmentalist and activist, Odigha was awarded the Goldman Environmental Prize in 2003 for his efforts on protection of the rainforests of Cross River State from industrial logging – an action that did not go down well with some local and international industrialists who see the reserve as a gold mine.

Immediate past governor of the state, Liyel Imoke, was in favour of the conservation and “lock-up” of the forest reserve, and he supported Odigha’s work during his eight-year tenure in power.

But things took a fresh twist immediately after the May 29, 2015 swearing-in of Prof Ayade as governor, who appears not to be an apostle of a complete lock-up of the state forest reserve. According to sources close to him, Ayade believes that the forest should be an avenue to generate revenue that will go a long way in helping it to meet its financial obligations and clear its backlog of debts.

It was also alleged that the governor was furious over the activities of the Forestry Anti-logging Task Force operating within the CRSFC but reporting directly to Imoke.

Speaking with our correspondent on phone, Odigha said he was detained for 24 hours and that the Secretary to the State Government listed as part of the reasons for his arrest was the fact that forests under his care had been depleted. But Odigha denied the allegation, saying that, quite to the contrary, the forest reserve and communities therein prospered when he headed the CRSFC.

“As I speak to you now, the forestry commission has been dissolved and the state anti-deforestation committee has also been dissolved. The secretary to state government alleged that under my leadership the state forests depleted – which is the reason they called for my arrest and dissolved the Board of the Commission,” he said.

Governor Ayade’s aide on media and publicity, Christian Ita, said the governor was not pleased with the United Nations report that the state forests under the watch of Mr Odigha were being stolen by over six per cent annually. He said the arrest of Odigha was to enable proper investigation into the matter to ensure that the state maintained its global leadership in forest matters.

An environmentalist, Dr Okon Joseph, said the happening in the state was targeted at rubbishing the huge achievements of the leadership of the Commission, which has taken the state to global reckoning in terms of the UN-REDD+ programme.

Like Loading...
2015-06-12
admin
Previous: Governments shift gear toward delivery of new climate pact
Next: Friends of the Earth: How Buhari can achieve a sustainable Nigeria