August 16, 2017 Comments Off on Nations celebrate as Minamata Convention enters into force 642 Views

The world’s first Convention to protect the environment and human health in close to a decade, the Minamata Convention on Mercury, entered into force on Wednesday, August 16, 2017 committing its 74 Parties to reducing the risks to human health and the environment from the harmful release of mercury and mercury compounds. Mercury is recognised to be particularly harmful to unborn children and infants. 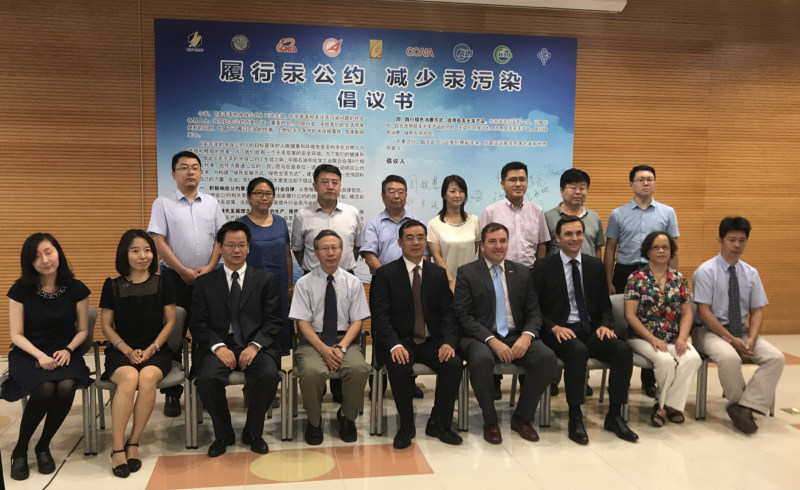 The entry-into-force celebrations took place on Wednesday in various parts of the world, including in Beijing, China. The 30th Party to the Convention, China convened a workshop that focused on the medical devices sector.

Governments that are party to the Convention are now legally bound to take a range of measures to protect human health and the environment by addressing mercury throughout its lifecycle. This includes banning new mercury mines, phasing-out existing ones, and regulating the use of mercury in artisanal and small-scale gold mining, manufacturing processes, and the production of everyday items such as cosmetics, light bulbs, batteries and teeth fillings.

Nigeria is yet to ratify the Convention.

The convention also seeks to reduce emissions as side effects from other industrial processes, such as coal-fired power stations, waste incineration, cement clinker production, and contains measures on the interim storage of mercury, on mercury waste and on measures to reduce the risks of contaminated sites.

“The Minamata Convention shows that our global work to protect our planet and its people can continue to bring nations together. We did it for the Ozone layer and now we’re doing it for mercury, just as we need to do it for climate change – a cause that the Minamata Convention will also serve. Together, we can clean up our act,” said Erik Solheim, head of UN Environment.

UN Environment hosts the secretariat of the Minamata Convention and assists countries in working toward meeting the Convention’s objectives.

According to scientists, there is no safe level of exposure to mercury nor are there cures for mercury poisoning, which at high levels causes irreversible neurological and health damage. Unborn children and babies are the most vulnerable, along with populations who eat fish contaminated with mercury, those who use mercury at work, and people who live near a source of mercury pollution or in colder climates, where the dangerous heavy metal tends to accumulate.

A 2017 study comparing mercury levels among women of child-bearing age in the Asia and Pacific regions revealed high traces of mercury in 96 percent of the women tested from Pacific communities who have high fish diets.

“I am delighted to join others in the international community and celebrate the entry into force of the Minamata Convention on Mercury. It is an honor for the Global Environment Facility (GEF) to be tasked with providing grants for projects and programs to reduce and eliminate the use of mercury. We are ready to continue to help countries conducting inventories, implementation plans, and investments in technology to make mercury history,” said Naoko Ishii, GEF CEO and Chairperson.

The GEF is part of the Financial Mechanism of the Minamata Convention.

Up to 8,900 tonnes of mercury are emitted each year. It can be released naturally through the weathering of mercury-containing rocks, forest fires and volcanic eruptions, but significant emissions also come from human processes, particularly coal burning and artisanal and small-scale gold mining. Mining alone exposes up to 15 million workers in 70 different countries to mercury poisoning, including child labourers.

Other human activities that may be sources of mercury pollution include the production of chlorine and some plastics, waste incineration and use of mercury in laboratories, pharmaceuticals, preservatives, paints and jewelry. Since the element is indestructible, the Convention also stipulates conditions for interim storage and disposal of mercury waste.

Like other heavy metals, mercury persists in the environment and builds up in human and animal tissue, particularly in fish. Because it is easily vaporised, mercury can be transported through the air over long distances far removed from its original emission source, polluting air, water and soil.

Signed by 128 countries, the Convention takes its name from the most severe mercury poisoning disaster in history, which came to light in Minamata, Japan in May 1956, after sustained dumping of industrial wastewaters into Minamata Bay, beginning in the 1930s. Local villages who ate fish and shellfish from the bay started suffering convulsions, psychosis, loss of consciousness and coma. In all, thousands of people were certified as having directly suffered from mercury poisoning, now known as Minamata disease.

The first meeting of the Conference of the Parties to the Minamata Convention on Mercury (COP1) will take place from September 24 to 28, 2017 in Geneva, Switzerland.