Namibia is the only country with the last free-roaming black rhinos in the world.

The Save the Rhino Trust (SRT) on Wednesday, October 28, 2020 made the assertion, citing intensified monitoring and biological management as contributing factors.

According to SRT Chief Executive Officer Simson Urikob, the numbers are now over 200, up from 60 in 2013.

“The numbers are growing. We are incorporating different methods that have helped in increasing numbers.

“We realised that same breeding was not increasing the numbers so we brought new bulls from other national parks and that has helped to increase numbers.’’

Urikob, said intense monitoring has also helped with keeping poachers away, but the COVID-19 outbreak is threatening those efforts.

“We had not had any poaching cases since 2017 but this year we recorded four incidences.

“This is because most lodges are closed thus there are no community rangers in those areas to monitor the rhinos.’’

Tagged with: black rhino Namibia Save the Rhino Trust (SRT) 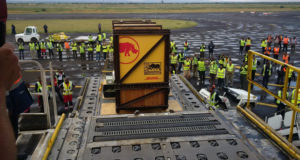