With 184 Nationally Appropriate Mitigation Actions (NAMAs) under development, and only 19 having secured (partial) funding, a large gap remains at NAMA implementation level. 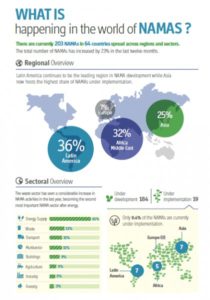 This is one of the findings of the Annual NAMA Status Report 2016 by Ecofys and the Energy research Centre of the Netherlands (ECN), which was launched during the recent UN Climate Change Conference (COP22) in Marrakech, Morocco.

Now that the historic Paris Agreement has entered into force, the two current themes for climate change mitigation are increasing ambition and moving toward implementation of countries’ climate action plans known as Nationally Determined Contributions (NDCs.) Although the Paris Agreement does not explicitly mention NAMAs, it requests Parties to implement mitigation actions to achieve their overall mitigation objectives, as articulated in their NDCs. NAMAs can meet the needs of the Paris Agreement as implementing vehicles for NDCs, especially since they are designed to align with national development targets and low emission strategies, and provide the right level of transparency.

This 2016 Annual NAMA Status Report takes stock of how far NAMAs have come, looks back on the early beginnings of the NAMA concept, where we are now in terms of development, implementation and finance, and attempts a glance at the future of NAMAs in a new climate regime.

The report concludes that the concept behind NAMAs still holds great value and that NAMAs can continue to play an important role in reaching common climate goals.

Published under the Mitigation Momentum Project, the report was funded by the International Climate Initiative of the German Ministry for the Environment (BMUB).