Moving against eco-colonialism, by Bassey

October 16, 2018 Comments Off on Moving against eco-colonialism, by Bassey 852 Views

In his welcome words at the School of Ecology on Eco-Colonialism in Abuja on Tuesday, October 16, 2018, Nnimmo Bassey, Director, Health of Mother Earth Foundation (HOMEF), frowns at new forms of genetic engineering including synthetic biology and gene drives. He calls for the maintenance of the moratorium on extreme genetic engineering as imposed by the Convention on Biological Diversity 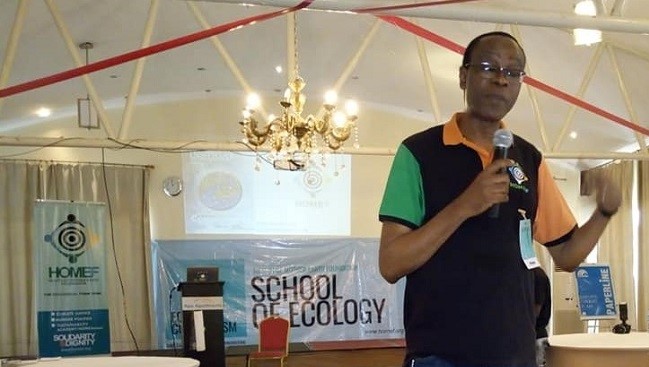 Colonialism is alive and well and manifests in expected and unexpected forms. It started as a practice of taking political control of another country or territory, occupying it and exploiting it economically. The primary aim of colonisation was, and remains, the exploitation of resources and territories for the benefit of the coloniser. The basic impetus has always been economic and corporate entities remained firmly behind the colonial masks.

Today, most nations have obtained levels of political and flag independence. Economic independence is still a huge struggle with several factors often arising as impediments to its attainment. These include geopolitical power structures, social and cultural imperialism and institutional arrangements that ensure continued control and exploitation. This has been aided to a large extent by corporate capture and control of political levers across the globe.

Thus, Colonialism is not only alive but has grown and metamorphosed into forms that subvert the rising of a truly postcolonial state. This has partially happened because the colonised is content to take the place of the colonial master and to continue as a middle man for the old system rather than to overthrow it. As Frantz Fanon noted in The Wretched of the Earth, “The national bourgeoisie will be quite content with the role of the Western bourgeoisie’s business agent, and it will play its part without any complexes in a most dignified manner… In its beginnings, the national bourgeoisie of the colonial country identifies itself with the decadence of the bourgeoisie of the West. We need not think that it is jumping ahead; it is in fact beginning at the end. It is already senile before it has come to know the petulance, the fearlessness, or the will to succeed of youth.”

This state of affairs can also be described as coloniality – originally the state of relations in a colony but today being driven by persistent and undergirding reign of colonial mentality.

Our School of Ecology provides spaces for the interrogation of colonialism in the framework of the colonisation of Nature.  We look at the exploitation and commodification of Nature in ways that subvert natural evolution and creates economic levers for the domination and control of species and planetary systems. The sessions look at the emergence of new technologies and production methods that ignore or outstrip existing regulatory frameworks and which are pushed willy-nilly without regard to the current capacity of humankind to fully understand the intricacies and interdependences of the webs of life on Planet Earth.

The present School of Ecology is looking particularly at new and extreme forms of genetic engineering including synthetic biology and gene drives. We are also looking at geoengineering experimentation aimed at having humans and corporations literally assume control of the planetary thermostat.

We are conscious of critical voices that have called for the restriction of these experimentations to laboratories and for diligent precaution until the harms and goods of the proposed systems can be fully evaluated, understood and accepted.

A Manifesto issued by over 110 civil society groups against geoengineering stated among other things, “Geoengineering technologies may disrupt local and regional weather patterns and further imbalance the climate, with potentially catastrophic effects for some regions, including on water availability and food production. The adverse impacts and side effects could cause more regional and international conflicts.” The Manifesto calls for, “Respect and effective guarantees for the right of Indigenous Peoples and local communities to free, prior and informed consent for any geoengineering experiment or project that may impact their territories or human rights.

“Respect for peasant rights, lands and territories, acknowledging that their livelihoods, including Indigenous Peoples’ communities, forest dwellers, artisanal fishers and pastoralists, are a vital source of food for most of the world’s population; pave the way for food sovereignty; contribute to mitigating greenhouse gas emissions; and regenerate soils and ecosystems. Their lands are particularly vulnerable to being grabbed and exploited for geoengineering experiments and deployment, and their agriculture is threatened by the side effects.”

We join in the call for the maintenance of the moratorium on extreme genetic engineering as imposed by the Convention on Biological Diversity (CBD) as they threaten to wipe out species. Extreme and even old fashion genetic engineering threaten our biodiversity, overall ecological health and our food sovereignty. We also join the call for a ban of all geoengineering experiments and deployment as they threaten our very lives. Geoengineering’s side effects will obviously be deflected to already vulnerable regions and territories and Africa will be among the worst hit as present computer models show. Besides, geoengineering presents false solutions to the climate crises and will lock in polluting production systems that are driving the Earth towards catastrophic temperature rises as recently captured in the 15th Special Report of the Intergovernmental Panel on Climate Change (IIPC).

We call for total decolonisation of Nature and for the global measures for the securing of justice and allocation of responsibilities for outlaws or neo-colonial lords. Without strict responsibility, exploitation quickly spirals into the worst forms of imperialism, according to Kwame Nkrumah. Nothing can be worse than irresponsible disruption of our life support systems.

Today we have seasoned and experienced instigators in the house. We also have eager and open-minded participants. Our target is the interrogation of our mindsets and objective realities. We stand firmly against eco-colonialism. Where do you stand?