No fewer than 12.5 million Nigerians have improved access to potable water in the last six years of President Muhammadu Buhari’s administration.

The Minister of Water Resources, Suleiman Adamu, disclosed this at the opening of a two-day Training for Water Resources Correspondents in the water sector in Abuja on Thursday, September 16, 2021.

The training was organised by the National Water Resources Institute, Kaduna.

Adamu said this milestone showed the commitment of the Federal Government towards meeting the potable water needs of the populace.

He noted that provision of potable water was a shared responsibility of the three tiers of government.

The minister said the Federal Government had played its part by ensuring that bulk water was readily available in all its dams and reservoirs.

He said state governments, through their MDAs, were directly responsible for the provision of water supply to urban, small towns and rural areas.

Adamu also noted that the local government authorities were responsible for the rural communities in their jurisdictions.

“Provision of potable water supply to all the inhabitants in Nigeria is a complementary shared constitutional responsibility of the three tiers of government.

“While the Federal Government provides bulk raw water via its over 200 dams across the country, it is the responsibility of respective state governments to provide potable water directly to the people.

“The Federal Government through the Federal Ministry of Water Resources is responsible for policy formulation, advice, data collection, monitoring and reporting among others.

“A total capacity of 146,669,125 liters/day and enabled additional 12.5 million population coverage by the Federal Government within the last six years,“ he said.

Adamu commended the institute for the leadership role in capacity development and research.

He added that such party had seen the signing of an MOU with WaterAid Nigeria on mainstreaming the curriculum for Water, Sanitation and Hygiene services in the training of Water Resources Practitioners.

“The training platform being provided today is to enable greater understanding of the activities in the water sector and to enhance informed balanced reportage of the trends in the Water Sector”.

He said that water must be tested with all reverence to sustainability, adding that managing water as scarce resources ought to be done in a sustainable manner.

Dr Martins Eduvie, a Director from the institute, called for effective management of groundwater resources.

He also noted that water scarcity was on the increase largely from contaminated water sources and pollution.

Eduvie, who said that proliferation of boreholes in the country was worrisome, said it should be done in a sustainable manner and in line with the drilling codes.

The minister also expressed hope over passage of the National Water Resources Bill before the National Assembly.

The bill, which was introduced in the 8th Assembly, caused outrage as some Nigerians interpreted the law as a power grab by the Federal Government.

“It is part of our roadmap as far as I am concerned. We will continue to engage with the National Assembly, now that they have come back from recess, we hope to engage.

“At the same time, we are talking to all other antagonists to allay the fears to accommodate whatever apprehension. We are very confident that we’ll get that bill passed,” the minister said.

He further stated that it was wrong for a section of Nigerians to completely criticise and condemn the whole bill instead of pointing out areas that needs to be reconsidered.

“It doesn’t make sense if you have problem with the bill; identify the key issue or problem if there is need for amendment instead to completely condemn just because of one or two items you are not satisfied with.

“In the National Assembly, you have public hearing, and we will still go back,” the minister said.

He pointed out that water resources sector over the years had been under-reported and underestimated, but with the training, Nigerians will know more and appreciate the water sector.

He also promised to support activities of the media and ensure it is carried along in policies and programmes by his Ministry.

It was introduced to the House of Representatives on May 4, 2017, and passed for second reading and third reading on July 6 and Dec. 19, respectively.

However, the Senate is yet to pass the bill as some senators raised concerns on its provisions. 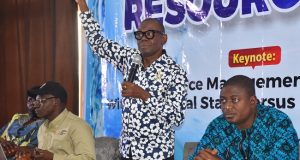 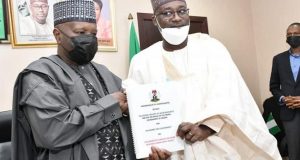 The Minister of Water Resources, Mr Suleiman Adamu, says that protection of water catchments in ...