The United Nations Climate Change negotiations ended in Bangkok, Thailand on Sunday, September 9, 2018. The meeting was the final gathering of countries before they meet to agree the implementation guidelines for the Paris Agreement in Katowice, Poland this December. 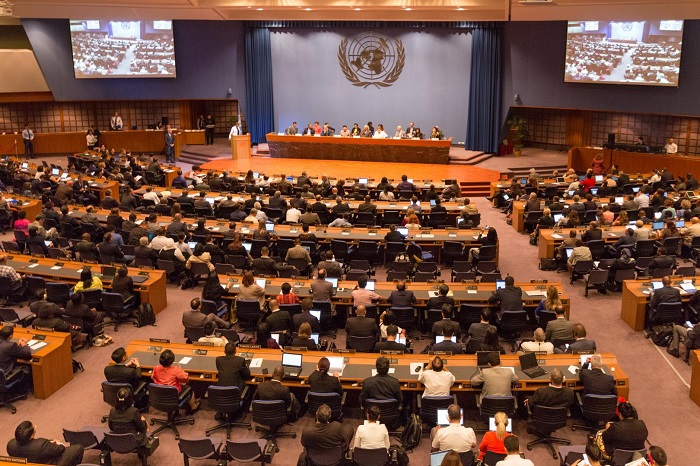 Civil society organisations acknowledge that while there has been progress on the negotiating text for the Paris Rulebook it has been uneven. Substantive issues on finance and differentiation, among others, still hang in the balance, they say.

To reach an ambitious deal in Katowice, which includes a strong rulebook, finance and stronger commitments to ambition, they insist that political leaders must talk to each in the next few months to infuse trust into climate discussions.

Thousands of people in over 90 countries on every continent came out on the streets at the weekend to demand that governments tackle climate change.

On Monday, the UN Secretary General António Guterres will make a plea to act on the climate crisis that is ravaging entire communities and hundreds of mayors, CEOs and citizens will pledge their commitment to the cause at the Global Climate Action Summit in California this week.

The IPCC Report on 1.5C, which will feed into the Talanoa Dialogue, will heighten the drumbeat for action. This, observers feel, must be loud enough to spur the Polish Presidency to lead diplomatic efforts on all fronts as hosts in Katowice.

On progress made in Bangkok, Chair of the Least Developed Countries (LDC) Group, Gebru Jember Endalew, says: “While there was a greater sense of urgency from countries coming into Bangkok, progress has been slow. There remains an immense amount of work to be done and only five negotiating days in Katowice before the Paris Agreement rulebook needs to be delivered. The effectiveness of the Paris Agreement depends on the delivery of a robust set of implementation guidelines. Nearly 300 pages of text need to be refined so that textual negotiations can begin on day one in Katowice.”

A key issue in Bangkok has been climate finance.

Endalew adds: “The Paris Agreement cannot be implemented without climate finance. Clear rules need to be agreed in Katowice to support developing countries taking climate action. The failure of rich countries to deliver adequate resources has severe ramifications for people and communities in the Least Developed Countries and around the world that are already bearing the brunt of climate change on a daily basis.”

On loss and damage, Endalew notes: “Loss and damage must be taken seriously by the international community. Extreme weather events continue to increase in frequency and severity, while slow-onset events are growing in impact. The LDCs and other developing countries lack the tools and resources to cope with the devastating impacts of climate change. Addressing loss and damage is integral to an effective global response to climate change and the rulebook must reflect this to achieve the goals of the Paris Agreement.”

Secretary-General of the Pan African Climate Justice Alliance (PACJA), Mithika Mwenda, opines that “it is becoming thicker and thicker as we head to Katowice”, pointing out that the hardline position on the evolving negative force around the US is worrying.

According to him, without quantified global goal on finance then the Paris rulebook will be immaterial.

His words: “We urge African countries and developing nations counterparts to remain steadfast on their stand regarding the Paris rulebook. Evidently, the North is not interested in any action to combat climate change. While the South is doing it’s fair share on emission reduction, rich countries want to reverse the modest gains achieved since COP21 in Paris, perhaps motivated by the US which has announced its withdrawal from the Paris Agreement.”

Members of the Climate Action Network (CAN), a global network of over 1,200 NGOs working to promote government and individual action to limit human-induced climate change to ecologically sustainable levels, also add their voices to the discussion.

“Finance to developing countries – to both help them cut their greenhouse gas emissions and to support poor communities vulnerable to extreme climate shocks – remains a critical, unresolved issue. If developed country governments don’t step up by the time COP24 kicks off in December, they risk putting the Paris Agreement in jeopardy.”

Mohamed Adow, International Climate Lead, Christian Aid: “We have fortunately avoided going off the cliff edge. Governments have empowered the co-chairs to turn the progress made so far into a more solid basis for negotiations in Poland. It is now vital for the co-chairs to change the course of the negotiations from diplomatic doldrums towards a win-win approach and craft middle ground options that the whole world can get behind at COP24.”

Harjeet Singh, Global Lead on Climate, ActionAid International: “The Paris Agreement is on the brink. Developed countries are going back on their word and refusing to agree clear rules governing climate finance. If they remain stuck in their positions and fail to loosen their purse strings, this treaty may collapse. We have a mountain to climb before the next climate summit this December. Finance ministers must now step in and deliver on the promises made in Paris.”

Rixa Schwarz, Team Leader International Climate Policy, Germanwatch: “A lot of work remains as we leave Bangkok tonight. All countries will need to do their bits to lead us towards a successful COP24. German Chancellor Angela Merkel must explain by COP24 how she will materialize her promise of doubling the German climate finance and announce a contribution to the Green Climate Fund. The coal commission must deliver first results to prove that Germany is serious about mitigation action. Also, the EU must send the strong signal of enhancing the current 2030 climate target.

Gilles Dufrasne, Policy Researcher, Carbon Pricing, Carbon Market Watch: “Market negotiations have suddenly jumped forwards in Bangkok, but countries are heading into a heavy fight at COP24. Some seem to have accepted the fact that markets as they exist today cannot continue, but we’re still navigating in very risky territory. The threat of agreeing on catastrophic rules for post-2020 markets is still very real and frightening.”

John Nordbo, Head of Climate Advocacy, CARE Denmark: “The negotiation text is not exactly a piece of art, but at least we now have a basis for making much needed compromises at COP24. When ministers arrive at the COP in Katowice they must do their part of the job: increase mitigation, ambition, and make sure more finance is provided to poor people who suffer from the harmful impacts of the climate crisis.

“It is however very disappointing that no country seems to take on a leadership role and try to forge the compromises. The EU should seriously consider stepping in as the union has previously been able to play a bridge-building role. At present they don’t play this role and it creates a vacuum.”

Taehyun Park, Greenpeace East Asia Global Climate Political Advisor: “These talks have been beset with tension and parties have wrestled with reaching a balanced proposal on the Paris rulebook. Progress has slowed, leaving the heavy lifting for COP24. A leadership deficit is the root cause of this slow pace and needs to be immediately addressed. The upcoming California Climate Summit, New York UN Climate Week and Pre-COP must now be leveraged to unlock contentious issues like finance and differentiation.”

Sanjay Vashist, Director, Climate Action Network South Asia (CANSA): “South Asian countries are keen to lead the revolution towards renewable energy, but the region is being repeatedly hit by disasters. With our public resources constantly diverted to coping with impacts, climate talks must provide the climate finance needed to make the transition to renewables a reality.”

Nithi Nesadurai, Regional Coordinator, Climate Action Network South-East Asia: “While this meeting in Bangkok has experienced uneven progress and challenges, it has given Co-Chairs the mandate to prepare a joint reflection note proposing text and the way forward. COP24 is a significant conference to finalise the Rulebook of the Paris Agreement and raise climate ambition. The Co-Chairs’ outputs, supported by multiple forthcoming events, including the release of the IPCC 1.5C report, must facilitate the convergence towards achieving an effective and productive outcome at COP24. This includes the provision of adequate climate finance to enable developing countries to make a greater shift to clean energy investments. There is no time to lose!”

Erika Lennon, Senior Attorney, Center for International Environmental Law (CIEL): “Progress in Bangkok has been slow and significant work remains between now and Katowice. During COP24 the world will celebrate the 70th anniversary of the UN Declaration on Human Rights. Parties must take this opportunity to deliver on the vision of the Paris Agreement, that of people-centered climate action by adopting a robust set of Implementation Guidelines that integrates human rights, the rights of indigenous peoples, and gender equality.”

Alden Meyer, Director of Strategy and Policy, Union of Concerned Scientists: “The outcome of the Bangkok climate talks was uneven and leaves much work to be done over the next three months to assure a successful summit in Katowice, Poland this December. On the core issues of forward-looking climate finance and the degree of flexibility developing countries should be given on the information and reporting requirements for national commitments under the Paris Agreement, negotiators were stalemated in Bangkok. It’s now up to the incoming Polish presidency and officials leading negotiations to find ways to bridge the deep differences on these issues and to secure agreement in Katowice on a robust, comprehensive package of rules to implement the Paris Agreement.

Mark Lutes, Senior Global Climate Policy Advisor, WWF: “We leave Bangkok with agreement on the rules to implement the Paris Agreement within reach. COP24 must achieve a broader package of outcomes, including on more ambitious climate action and commitments, climate finance and addressing loss and damage from climate change. These areas are all essential to implementation of the Paris Agreement, and governments must put the pieces in place to achieve all of them by they time they convene again in Katowice.”

Jennifer Tollmann, Climate Diplomacy Researcher, E3G: “Let’s face it we’re leaving this session still far off from a successful outcome at COP24. Progress on the rulebook will require progressive alliance to step up and build trust and ministers to give guidance that starts bridging the gap on political crunch issues around finance and differentiation.

“If the rulebook is the backbone of the Paris Agreement, then an ambition outcome is its heart and finance its lifeblood – let one fall into disrepair and the whole body is in trouble. To make healthy progress on any, let alone all of these issues will require a significant step up in diplomatic outreach on behalf of the incoming Polish Presidency and traditional bridge builders like the European Union.”