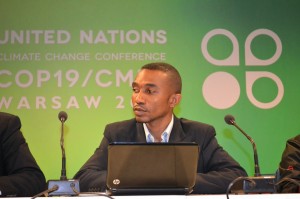 What is at stake here, the Olympics, the World Cup, Africa Cup of Nations torch or the visit of King Mohamed VI to President Mugabe? You be the Judge!

If East Africa was involved in this race, you can guess they will lift the gold medal but it was between the north and south so it can’t be it.

Well, this was the distance covered by the Morocco Network on Climate Change (MNCC) at Marrakech on October 7, 2014 and Zimbabwe Climate Change Coalition (ZCCC) on October 29, 2014 when the two national chapters of PACJA were launched respectively.

ALSO READ:  Our children’s planet: What does their education have to do with climate change?

What did the two nations have in common besides been African countries – The Challenge of Climate Change!

It is no longer news that Africa remains a vulnerable hotspot to climate change and its adverse impacts continues to derail the development gains made by the continent in the past, present and even in the near future if urgent actions are not taken. These actions have to be local and global and every stakeholder has a part to play.

African civil society organisations are not taken this challenge lightly. The Pan African Climate Justice Alliance (PACJA) has over the years initiated the formation of national networks of CSOs across Africa to champion the fight against climate change. It is against this backdrop that the Alliance which operates in 45 African countries with over 1000 CSOs recently launched the Moroccan and Zimbabwean chapters of PACJA.

This is what the Ministers in charge of the environment of the two countries say about this initiative:

“Today, we launch the Zimbabwe Climate Change Coalition and we hope they will carry the country’s interests at heart, to ensure sustainable development and moving towards low carbon growth and climate resilient Pathway for the nation” – Hon. Saviour Kasukuwere, Honourable Minister, Ministry of Environment, Water and Climate, Zimbabwe.

PACJA congratulates MNCC and ZCCC and welcome the two chapters to the One Big Family.

As the Alliance awaits the birth of more new national chapters across Africa, let the race continue…..Dare to join!