The release of a large volume of water from the Lado Dam in Cameroon Republic is causing unbelievable damage. On Sunday, the gushing water submerged a whopping 250 villages, snuffing out no fewer than 15 lives in the process. 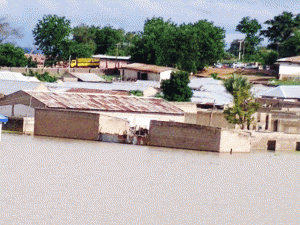 The development is not entirely novel. Indeed, it has been a yearly occurrence. Each time Cameroon releases water from the dam, parts of the neighbouring Adamawa State in Nigeria go under, albeit with minimal damage.

But the story was different this time around: it was carnage.

Despite a presumed prior warning, the hapless villages could not just get out of the path of the rushing water, leading to extensive displacement and a yet-to-be ascertained human casualty. It was gathered that between 15 and 18 bodies have so far been recovered from the Benue River.

Amid the confusion, seven women were said to have given birth in a public school building in Lamurde Local Council, where they were camped by rescue officials.

He said: “We received a letter from Cameroun Republic last Friday to notify us of their intention to release water from the Lado Dam which is located at the upper end of River Benue. A day after the water was released, the Cameroun Republic did not give us enough time to communicate with our people to vacate the flood-prone areas.”

Ari, who was visibly angry with the action of the Camerounian government, urged the Federal Government to, as a matter of urgency, contact the Camerounian authorities to ensure that full compensation was paid to the affected victims.

“The government of Nigeria should also enter into a bilateral agreement with the Camerounian government on how to avert the yearly disaster caused by Lado Dam to the people of the state,” submitted Ari, who is also Secretary to the Adamawa State Government (SSG). 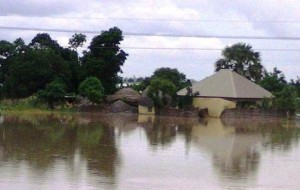 He called on the Federal Government to come to the aid of the state to assist the victims of the flood disaster, pointing out that the state’s resources are unable to cater for the victims.

He added: “Since the 1958 flood disaster that killed many people, this is the worst that has happened in Adamawa State. Many schools, hospitals, government buildings and over 250 villages have been submerged by the flood.

“We have written the Nigeria High Commission in Cameroun and the Foreign Affairs Minister on the flood and we are waiting for the Federal Government’s action on the matter.”

To avoid an outbreak of disease as a result of the flood, the SSG said that medical workers have been deployed to all the affected areas to provide free medical services to the victims.

On the total number of dead persons, Ari said that the official report to his committee showed that only two bodies were recovered from River Benue.

“The state Emergency Management Agency have also deployed its workers to various areas affected by the flood to provide the victims with food, blankets and other things they need to survive before the Federal Government arrive with its assistance,” he stated.

Other affected local councils include Numan, Fufore, Demsa and Guyuk, where victims were seen moving to public school buildings to take abode.

Ministry warns against indiscriminate dumping of refuse in dams

Director, Dams and Reservoir Operations in the Ministry of Water Resources, Mr Danjuma Madaki, has ...