Thursday 25th February 2021
Thursday, 25th of February 2021
Home / Pollution / Man and fossil fuel: Relationship that should have never been

July 9, 2020 Comments Off on Man and fossil fuel: Relationship that should have never been 612 Views

Man does live in the age of fossil fuel; most of the energy we use is gotten from coal, oil, and natural gas. I have heard that fossil fuels come from the bones of dinosaurs; I do doubt that very much anyways. Fossil means coming from ones living material.

It is usually formed anaerobically in an area under the soil, where there is no oxygen for decomposition. It comes in three different forms, which is solid, liquids and gases which are coal, petroleum, and natural gas.

Coal is formed in a swampy area such that, over time, the area is covered with sediments. It’s squeezed, moisture removed, and then heat and pressure overtime forms all sorts of solid coal. It can simply be combusted for energy to be gotten out of it. Petroleum is pumped out of the ground to make all sorts of finished products. Methane is gotten out of natural gas. They all help to give us an enormous amount of energy, and our lives have run beautifully on them for so long.

There is a problem though, our romanticising with fossil fuels is not all roses and lavender, and it comes at a cost. A big one, one that might be the biggest threat to our very existence. Fossil fuels have environmental impacts on our planet; impurities found in them are usually released into the atmosphere, causing air pollution, land pollution and water pollution. It just attacks us on every front.

Petroleum is gotten from the ocean; we dig deep down and pump that oil out of the ground, refine it, and get loads of stuff from it. Petroleum is easy to move, due to its liquid form, it is energy dense and way cleaner than coal, fewer impurities. Its problems though are that it still has some impurities in it, and its liquid state could lead to oil spillage. It is also a greenhouse gas and puts carbon dioxide into the atmosphere.

Methane gas is burned; energy is gotten out of it. We can heat it, its cleaner than oil and coal, it has lower carbon dioxide per amount of energy. Methane is although a greenhouse gas, it gets released into the atmosphere and increases global warming, its exploration destroys sediments, and hydraulic fracturing could lead to earthquakes and contamination of the water table.  All these fossil fuels are being used all over the world. Now we can imagine the enormous amount of harm that they must have caused for over the years.

So, in as much as I love electricity, would like to travel the world and enjoy taking a drive in fancy cars and a whole lot more. All thanks to fossil fuels. They have a huge drawback, a really expensive price tag, and we are surely and collectively paying that price today. We know things today that we did not know years ago. We had all our best lives with fossil fuel, it is time to cut loose and move on.

Oil spillage has caused so much harm in the Niger Delta region (South South) of my country, Nigeria. It has polluted the water, so much so that they are deprived of clean drinking water. The farms are almost impossible to cultivate. Their means of livelihood snatched from them, and the biggest polluters like Shell have not been brought to task. The health risk because of oil spillage is enormous, and children and adults alike are forced to live in such an agonising situation, day in day out.

The sad reality is that, those who bear the cost of pollution from fossil fuels are not the ones enjoying its profits. The world over, it is estimated that almost four million people die prematurely every year from outdoor pollution. It was reported in 2018 that 95 percent of the world live in areas with unhealthy air, according to the WHO standards. Fossil fuel comes at a great cost, one that is subsidised by all of us who share the land, water, and air that they conveniently pollute.

A hundred and ninety-five countries met in Paris in 2015 and agreed to keep warming below at least two degrees Celsius. Countries like Sweden, France, Netherlands, Scotland etcetera have been playing their part. Many organisations have also joined in for both practical and ethical reasons. If we all keep the momentum and switch to renewable energy, it will help keep fossil fuel right where they ought to be. In the ground. Bringing an end to a relationship that should have never been. 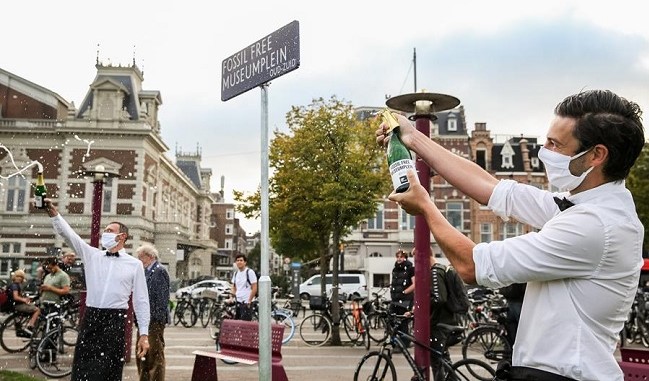 Artists, performers, and cultural workers gathered on Amsterdam’s Museumplein on Wednesday, September 16, 2020 to ...