Makoko: When climate change came to the slum

It is a small neighborhood, a crowded community that sits on a fetid lagoon, colored in sepia and greyscale, located on the coast of mainland Lagos. Wooden stilts are tucked deep inside its brackish waters with bits and pieces of rubbish adorning its surface and a tangle of boats impatiently slithering through the labyrinth of its waterways. Just above it is, in a fitting contrast is, coloured in all shades of commerce, the most travelled bridge on the West African continent. Like everyone who travels the bridge, the skies of the slum dwellers are blue and bright, but their waters are not, and certainly, not their health. And this, because, climate change came to the slum. 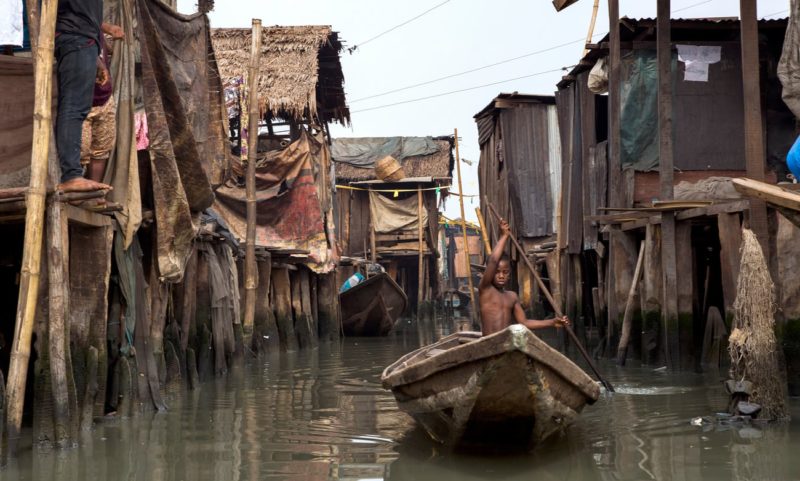 Makoko is a 19th century Lagos slum, formerly a fishing village and one of the oldest slums in Nigeria. Photo credit: The Guardian Nigeria

Makoko is a 19th century Lagos slum, formerly a fishing village and one of the oldest slums in Nigeria, yet an area of startling patchy development. Listed as one of the top 10 slums in Africa and regarded as the world’s biggest floating city, the area has an estimated population of about 86,000 people. With low hygiene and sanitary conditions, lack of toilets and constant exposure to vectors and extreme weather conditions, these 86,000 people are sitting ducks for climate change and its rancid effects on human health.

It is even scarier when one considers that Nigeria has over a thousand of these kinds of slums, with a bulk of them being in Lagos. And with climate change wreaking havoc on the health of communities, these slum dwellers are at high risk of diseases, major epidemics and even death.

Since the Paris Agreement was signed by countries of the world in 2015, the commitment of countries and cities has spiraled, leading to various climate action and activities to reduce global warming. The conversation around the term has also gained traction. Yet, for slum dwellers in Nigeria, not much has been done to keep them immune from the disasters climate change brings with it. If there was any doubt before, there is little now, that climate change is already affecting our health, in the slum and elsewhere. This is not a future prediction or a problem for the next generation, it is happening here and now, and of course happening disproportionately. The poorer population is more vulnerable than the rest. The World Health Organisation (WHO) has estimated from the current rate of epidemics caused by climate change that, between 2030 and 2050, climate change is expected to cause approximately 250,000 additional deaths per year, from malnutrition, malaria, diarrhoea and heat stress. This spells doom for more vulnerable populations like slum dwellers.

With the increase in downpours, floods and rising sea levels, these slum dwellers in Makoko whose existence is almost entirely on water and whose shelters are ramshackle combinations of wood and rusted zinc, are at an alarming risk of displacement as their shelters are not built to adapt to the changing climate. This displacement means more vulnerability, more climate displaced persons, more mental health disorders and more spread of diseases. It can also lead to major injuries, contamination of water supplies and death.

Paying a visit to Makoko, one would see that they are surrounded by water. With the extreme rising temperature and floods, the water becomes an easy breeding ground for mosquitoes, leading to malaria for most of the population which has little access to medical supplies without a standard hospital, facilities, equipment and available health personnel in the area. And with the surroundings saturated with dirt of various dimensions including human waste, the flood drags all the dirt and waste into the water which the slum dwellers still drink, making them susceptible to water-borne diseases. The children too, another set of people more vulnerable to climate change effects, run around barefooted and unclad, exposing them to mosquitoes and other vector carriers, and to sharp objects that the flood brings along with it to the settlement.

One dweller in the area has confirmed that their commonest ailments in Makoko are malaria, respiratory diseases and malnutrition. Climate change increases the possibilities of these three types of diseases-mosquitoes escalate incidences of malaria; lack of access to markets and farms due to flooding as well as negative effects of weather patterns of food crops required for healthy feeding increase likelihood of malnutrition; and with climate change effects that engender air pollution, come respiratory and cardiovascular diseases. Coupled with the fact that there is little or no standard health care, climate change makes the slum dwellers prone to heightened levels of illnesses with no prevention or cure in sight. According to the WHO, malnutrition and undernutrition – two damaging health issues – contribute to 3.1 million deaths every year. This spells gloom for the slum, except something is done.

The starting point for any solution is commitment, complemented with positive action to fight climate change through targeted policies and legislations for achieving Nigeria’s Nationally Determined Contributions (NDCs), and widespread knowledge sharing on climate change. The slums should be taken as a major concern by the government and mitigation and adaptation strategies especially in health, should be taught to the dwellers, access to medical supplies and facilities should be ensured, hospitals should be equipped to handle the spate of climate related epidemics and all medical centres should be fortresses for preventing climate change-related health crises, and curing them when they occur.