Lava flowing from giant rips in the earth on the flank of Hawaii’s erupting Kilauea volcano threatens highways. 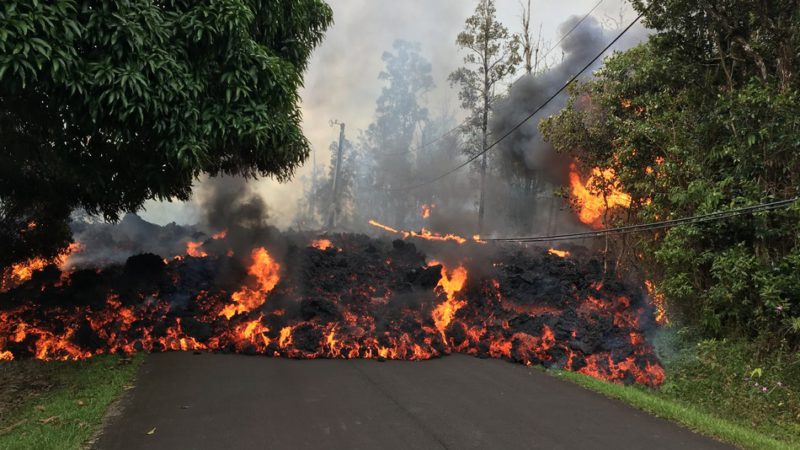 The threat raises the possibility that officials may order thousands more people to evacuate before escape routes are cut off on Tuesday, May 15, 2018.

Lava from a huge new fissure tore through farmland toward a coastal dirt road that is one of the last exit routes for some 2,000 residents in the southeast area of Hawaii.

More lava-belching cracks are expected to open among homes and countryside some 25 miles (40 km) east of Kilauea’s smoking summit.

This will possibly block one of the last exit routes, Highway 132.

Fountains of magma spouted “lava bombs” more than 100 feet (30 meters) into the air.

Mass evacuations will be triggered if either highway is hit by lava, said Hawaii National Guard spokesman Jeff Hickman.

“There’s a lot of worst-case scenario and roads getting blocked is one of them,” said Hickman.

Hickman stood on Highway 137, in the potential path of the lava flow, some two miles (3 km) away.

Dozens of homes have been destroyed since eruptions began 10 days ago.

Officials have ordered the evacuations of nearly 2,000 residents in the lower Puna district of the Big Island, home to around 187,000 people.

The American Red Cross said 500 people sought refuge in its shelters on Sunday night because of worsening volcanic activity.

Two more fissures opened in the past 24 hours, bringing the total to 19.

Unnerved by near-constant small earthquakes and emissions of toxic sulfur dioxide gas, Rob Guzman and his husband Bob Kirk left their home in Kalapana Seaview Estates while they still could.

“We just need the local government to calm down the panic that some of these 2,000 people are feeling that today, we’re going to be trapped with no way out,” said Guzman.

They left behind a banana farm and rental properties to go stay with friends.

The Hawaii Fire Department issued a “condition red” alert on Monday because fissures in the southeast area of the Lanipuna Gardens area were issuing high levels of sulphur dioxide.

“Severe conditions may exist such as choking and inability to breathe,” the department said in the alert.

While residents deal with noxious gas and lava on the ground, the U.S. Geological Survey is concerned that pent-up steam could cause a violent explosive eruption at the volcano crater.

Scientists had expected such explosions by the middle of this month as Kilauea’s lava lake fell below the water table.

The possibility exists, however, that water may not be entering the crater as feared, and gas and steam may be safely venting, scientists said.

“So far those explosions have not occurred and I think the key here is that the vent system is an open one.

”Therefore pressure is not being built or developed down at the top of the lava column,” Brantley told a conference call.