The increasing trend of international land grabbing – when governments and private firms invest in or purchase large tracts of land in other countries for the purpose of agricultural production and export – can have serious environmental and social consequences. Investors claim that land grabs can help alleviate the world food crisis by tapping into a country’s ‘unused’ agricultural potential, but such investments often do more harm than good, disrupting traditional land use and leaving half a billion family farmers vulnerable to exploitation. 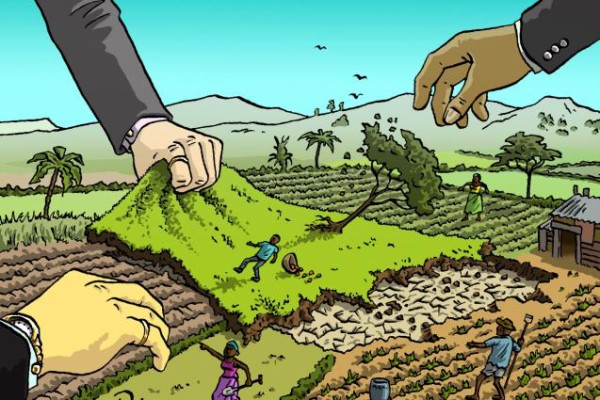 According to the Land Matrix, approximately 130 million hectares of land (or more than 52.7 million football fields) has been acquired globally in settled and impending land deals over the last 15 years. In South Sudan, the country with the most transnational land acquisitions, land has been sold for as little as US$0.025 cents per hectare.

Approximately 60 percent of the food grown on acquired lands is intended for export instead of feeding local communities, according to Oxfam America. Nearly two-thirds of land grabs occur in countries with serious food security problems. In the Nacala Corridor of Mozambique, the Prosavana land grab will acquire 14 million hectares of land, displacing upwards of 500,000 people that already cultivate the area. According to The World Food Programme, about one-third of Mozambique’s 24.5 million inhabitants are malnourished and 500,000 children ages six to 23 months are undernourished.

“We need to challenge the paradigm of development that trivialises and ignores the human consequences of these land acquisitions by corporate investors and governments. The idea that ‘some have to be sacrificed’ for the ‘larger national good’, which is nothing more than the double-digit economic growth that benefits a few, must be rejected – even if the deals are between developing countries and framed by the rhetoric of south-south cooperation,” says Anuradha Mittel, Executive Director of The Oakland Institute, a California-based think tank that researches and calls attention to the most pressing social, economic, and environmental issues.

To highlight how detrimental these land grabs are, The Oakland Institute published a report documenting the effects of land grabs in Tanzania’s Kilombero Valley. The large-scale rice plantation built by the company Kilombero Plantations Ltd (KPL) comprises 20 percent of the valley and has been heralded by The Bill & Melinda Gates Foundation and the U.S. Agency for International Development (USAID) as a model investment project.

But, according to The Oakland Institute report, villagers in the region are worse off from before the plantation was built. The villagers were forced to either sell their land or accept new land as compensation. Those who sold their land did not receive the original sum promised by the company, receiving TZS 10,000 (US$6) per acre instead of TZS 30,000 (US$17) per acre. Villagers who chose to be given new, often infertile land would only receive up to three acres, no matter how much land they had before. And many farmers have yet to receive any compensation for their land, leaving them without a livelihood.

The following 15 organisations are working to fight land grabs around the globe.

ActionAid is an international nonprofit organization working to free people from injustice and poverty around the world. Their #LandFor campaign supports families and their rights to keep their farmland. Their publication, Act On It: Four Key Steps to Prevent Land Grabs breaks down the policies and reforms that governments need to do to prevent land grabs. Most recently, they’ve published, New Alliance, New Risk of Land Grabs, examining how the G8 Alliance for Food Security and Nutrition increases the risk of rural communities losing their land to large investors.

ETC Group focuses on how new technologies can impact the world’s poorest people. ETC group has been critical of ‘The New Bioeconomy’, the emerging industrial movement to rely on biologically-based materials for goods and services. These green technologies are prompting a resource grab, primarily in lands and with resources in the global south, which ETC Group has exposed in their book, Earth Grab.

Global Justice Now is a social justice organisation that mobilises people to fight for change. Their food sovereignty campaign mobilises people to stop big corporations that are dominating the small-scale farms that are feeding the world. Global Justice Now provides ways to take action against land grabbing and stand by small farmers to support food sovereignty.

GRAIN is an international non-profit organisation that supports non-profits through research, networking, and alliance-building. Their research on land grabs, such as their report on The Land Grabbers of the Nacala Corridor in Mozambique, exposes corporations that are taking advantage of developing countries.

Through advocacy and grant-making, Grassroots International supports the right to land, food, and water for individuals around the world. Their educational resources along with their Land and Hunger: Making the Rights Connection workshop help people learn about the threats of living without the right to land or food. They also work with organisations on local and international levels to defend human rights, such as when they worked with local organisations in Brazil to prosecute the assassins of land rights activist Sister Dorothy Stang.

A specialist unit at the University of Western Cape, PLASS is dedicated to restructuring and contesting land holdings and the agro-food systems in southern Africa. Their research and postgraduate teaching explore the access and resource use patterns and the relationships between governance and land, water, and natural resource access of the poor.

With a network of 152 member organisations in 54 countries, ILC works to secure and protect the land rights of individuals, especially women and indigenous peoples. ILC not only features good practices occurring around the world, but they also offer leadership, educational, and networking opportunities. Every two years, ILC hosts the Global Land Forum, which supports equitable access to land through dialog, knowledge, and sharing.

La Via Campesina gathers together peasants, small and medium-size farmers, migrants, and agricultural workers all over the world to support small-scale sustainable agriculture. They work to protect food sovereignty and trade through their campaign and grassroots actions to block transnational corporations and free-trade agreements. ILC represents 200 million farmers worldwide and is a recognised voice in food and agriculture debates.

The Land Matrix Project is a land monitoring initiative that promotes transparency and accountability in land investments. The Project keeps track of official and unofficial land contracts and the different stages of negotiation: intended, concluded, and failed. With more transparent information, The Land Matrix Project hopes to make land development more open with greater community involvement.

For the past 40 years, Landesa has been working to secure land for the world’s poorest peoples. In their campaign, Land Post-2015, Landesa is aiming to incorporate land-rights in the international global agenda after the Millennium Development Goals expire in 2015. The organisation is also putting together how-to guides for responsible land development and investment based on field research and stakeholder involvement that will be adaptable to different countries.

Namati is building a grassroots campaign of legal advocates that are providing support for people living outside the protection of the law. Through quality legal aid, research, advocacy, and a global network Namati is ensuring that people maintain their rights. In Uganda, Mozambique, and Liberia, Namati is helping 23,400 people document their land and protect their land rights. They have also put together a Community Guide to Protecting Lands and Resources.

Oakland Institute is an independent policy think tank whose research sheds light on social, economic, and cultural issues around the world. Their work regarding land rights is dedicated to increasing transparency about land deals, development, and the impact they have in several African countries.

Oxfam International envisions a world without poverty. Part of their work focuses on defending individual’s rights to natural resources. They work with farmers and fishers to defend their resources and also help communities gain legal title to their land. They help give people a voice, like the 260 young people in Curuguaty, Paraguay, who have been left without land because of a land grab.

The World Rural Forum analyses the problems and needs of rural farmers around the world and through meetings with universities, research centres, farmers associations, and NGOs draws up plans of action. Through their online publications and events, The Forum aims to spread awareness about rural development issues as well as promote development proposals.

Food security: Agricultural research will be given priority, says minister

The Federal Government says one of the greatest threat to food security in Nigeria is ...