Lagosians urged to use water wisely

January 5, 2018 Comments Off on Lagosians urged to use water wisely 748 Views 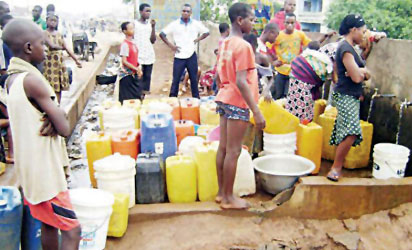 Badmus gave this advice in an interview with the News Agency of Nigeria (NAN) in Lagos.

He said that the global water scarcity threat necessitates wise usage of water by consumers.

According to him, any consumer that uses water wisely will appreciate the metering system the corporation has adopted to protect the interest of residents.

”The metering system has made water consumers to be aware of how much the corporation charges per cubic meter, which is equivalent to 1000 litres.

”This is the cheapest rate you can find in any country,” he said.

Badmus said that the Corporation has metered about 32,000 properties in the first phase of the exercise.

According to him, 24,000 pre-paid meters, 6,000 old meters and 2,000 mechanical meters have been installed in Lekki axis, Victoria Island Annex, Surulere, Omole and Ikeja among others.

Badmus said that the metering of houses would continue to other communities not yet covered once there was delivery of additional meters.

He enjoined the residents not yet metered not to relent in paying their water bills.

The managing director said that those metered would be recharging their cards when they run out of water.

Badmus said that the corporation was working relentlessly to have potable water to supply to areas not yet covered in its network.