Lagos will lose 260,000 lives to flood in 10 years, scientists predict

Though the Lagos State Government has given assurances on mitigating future flood disasters, in the aftermath of the recent flooding, a recent report which chronicles flooding hazards of 16 years in the state has shown that such events could result in loss of some 260,000 lives in the next 10 years. This may be accompanied by a GDP (gross domestic product) loss of $5526.2 million and $48.1 million urban damage. 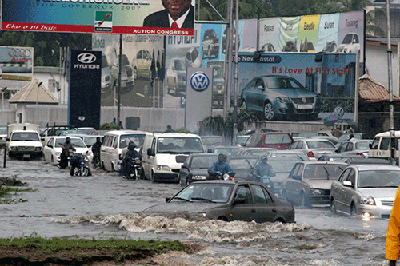 Motorists and cyclists wade through a flooded Akin Adesola Street, Victoria Island, Lagos, during the infamous the July 2011 flooding

The study, titled “Coastal Cities at Risk”, funded by the International Development Research Centre (IDRC), was released exactly a year ago on July 10, 2016.

It shows  that anthropogenic factors (rather than climatic) such as removal of vegetation, loss of wetland, obstruction of water ways, as well as a large population of environmentally-ignorant people, will continue to cause flooding.

ALSO READ:  Odey: Why I was labelled ‘Mr. Lake Nyos’

Conducted by Dr. Ibukun Adelekan of the Geography Department, University of Ibadan, it showed  the July 10, 2011 flood caused an estimated loss of N30 billion (as at then where N150 = $1). Insurance claims following the flood event was the highest recorded from flood incidents in Nigeria. There were 25 lives lost, while many were rendered homeless as houses were submerged by the floods.

According to the study, the July 2011 flood was caused by heavy rains of 233 mm. Incidentally, experts say this year’s rain water collected is about 477mm. “That is equivalent to the rainfalls experienced in other climes for six months,” Mr. Ade Adesanya, Lagos Commissioner for Waterfront Infrastructure Development, said.

The study spotted inadequate drainage system in most parts of the city and blocked drains resulting from indiscriminate dumping of solid waste as a predisposing factor to future disaster.

The study also finds that Lagos is even more vulnerable to flood hazards due to its large population who are unaware of environmental issues, limited information and skill coming from the government and lack of collaboration between relevant institutions.

As per climatic predisposing factors, it stated that sea level had risen by 63.6mm over the 20-year period at an average rate of 3.18mm/year.

It concluded by stating that resilience to flood risks in Lagos is highly dependent on the provision and functioning of basic infrastructure and social services which it presumes is not
yet at an acceptable level.

The Emir of Gumi, in Zamfara State, Justice Lawal Hassan, has said that over 100 ...