June 29, 2016 Comments Off on Lagos urged to shift stand on water privatisation 1,372 Views

Environmental Rights Action/Friends of the Earth Nigeria (ERA/FoEN) has asked the Speaker of Lagos State House of Assembly, Obasa Mudashiru, to side with Lagos people in rejecting Public Private Partnerships (PPPs) in the water sector. 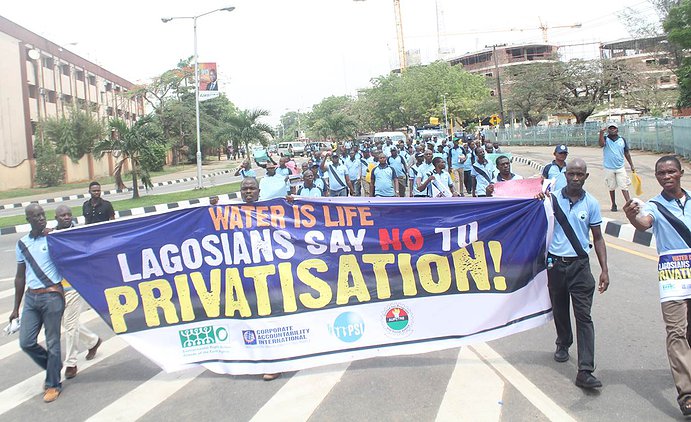 The ERA/FoEN, in a letter to the Speaker titled Privatisation Is Not Solution to Lagos Water Problem, frowned at attempts to foist the PPP model of water privatisation on the people despite the World Bank withdrawal from the scheme following civil society pressure and documented failures in other parts of the world.

Quoting the Speaker’s June 9, 2016 remarks at the commemoration of one year of the inauguration of the Assembly, ERA/FoEN said that his views that if Lagosians want clean water then the state government must privatise, was very disturbing, as the much hyped PPP is basically driven by the quest for private profits and not the desire to fulfill the basic needs of the people.

In the letter, ERA/FoEN insisted that PPPs fail to invest in the kind of massive infrastructure that people need and that the most celebrated water privatisation schemes have failed as governments who fell into the trap are now opting instead for remunicipalisation.

“Rather than bring efficiency, PPPs are known to have led to cost-cutting measures, prices hikes, layoffs and the extraction of profit from the people at the expense of human rights,” it read.

Manila, Nagpur, Cochabamba and Paris were cited as examples of cities where PPP failed and the recourse to remunicipalisation – a term for taking back previously privatised public water infrastructure from the hands of the privatisers.

In the letter, ERA/FoEN said that the Lagos State Water Corporation’s (LSWC) present parlous state of affairs is a result of over 16 years of World Bank-driven policies, bad management and monumental corruption, which culminated in the ouster of immediate past Group Managing Director, Shayo Holloway, on October 16, 2015 after a strongly-worded query issued by the office of the Head of Service demanding he explain the poor state of water infrastructure in the state.

ALSO READ:  Abiodun to Ambode: Why Mile 12 Market relocation is spot on

Further, it noted, “Apart from budgetary allocations, the LSWC attracted loans from the World Bank and international donor agencies to fund water supply expansion schemes such as the Iju, Adiyan, and Isashi Waterworks, as well as expansion of distribution networks. These loans, running into billions of naira have not translated into improved water supply for residents and no one is being called to account for this.”

The Resolution urged national governments to take necessary action to provide safe, clean, accessible and affordable drinking water for all. Several other global bodies like the   Committee on Economic, Social and Cultural Rights, have recognised water as human rights.

On the way forward, it recommended that water remain in public control, urging the Speaker to support its campaign to get the Lagos government to reject all forms of water privatisation and commodification; reject contracts designed by, involving, or influenced by the IFC, which operates to maximise private profit, while fully upholding the human right to water as an obligation of the government representing the people.

The Lagos government was encouraged to build the political will to prioritise water for the people and come up with a comprehensive plan that invests in the water infrastructure necessary to provide universal water access.