May 2, 2018 Comments Off on Lagos re-certifies 296 waste management operators 818 Views 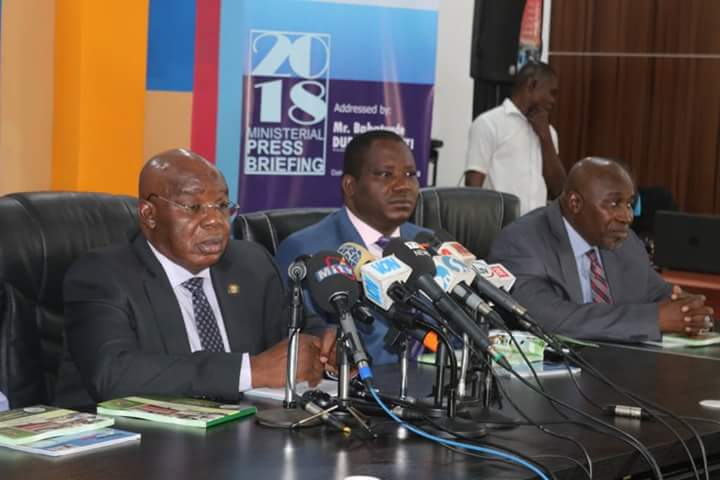 Lagos State Commissioner for the Environment, Mr Babatunde Durosinmi-Etti (left), during the briefing

Durosinmi-Etti announced this at the 2018 Ministerial Press Briefing to commemorate the third year in office of Gov. Akinwunmi Ambode on Wednesday, May 2, 2018 in Ikeja.

He said that said the evacuation of residential waste was in progress and refuse littering across the state would soon be a thing of the past.

According to him, the ministry has been relating with the PSP operators and there is no form of fractionalisation among them.

“The ministry has a process in place. Every PSP is registered; every truck is certified and registered in the ministry.

“The ministry has an obligation to deal with any PSP that is willing to work with it, in fulfilment of its mandate to keep Lagos clean.

“We should not play politics with the health of Lagosians, in keeping Lagos clean.

“No job is being taken from anybody, we went as far as creating access to capital, through the Employment Trust Fund for PSPs who are willing to work with us.

“My idea is not to work with cartels in dealing with the health and environment of Lagosians. The idea is to go through certification, have an open door policy; it is both a function of offer and acceptance and coming willingly to work,’’ he said.

The commissioner said that the problem of rapid urbanisation was a challenge, as it created more waste for the state.

He said that in keeping with His Excellency’s vision of changing the face of Lagos through reforms of the solid waste management sector, the Cleaner Lagos Initiative (CLI) officially took off in June 2017.

Durosinmi-Etti said that a major update of the CLI was that to aid the delivery of a safe and sustainable environment, community sweepers would henceforth be supervised by the ministry of the Environment.

He said that mechanised street sweeping would be managed by three private companies – Avatar, Wastecare and Corporate Solutions.

According to him, the ministry has entered a new dimension with the engagement so far of 13,958 community sanitation workers for the sweeping of inner streets in the 377 political wards of Lagos State.

“Likewise, the WCOs, otherwise known as the PSP operators, have been charged with the responsibility of managing residential and general waste collection.

“Visionscape Sanitation Solutions now has the mandate of implementing waste management infrastructure development across the state, in addition to intervening in public waste collection to cover any lapses that may occur.

“I wish to appreciate the patience and understanding of Lagosians thus far and restate government’s commitment to the realisation of a sustainable environment as the bedrock of prosperity and social and economic well-being.

“Let me assure Lagosians that the Cleaner Lagos Initiative remains the panacea for delivering efficient and effective solid waste management in Lagos with its attendant benefits, such as job creation, and a cleaner and healthy environment.

“I am therefore confident that with its positive outlook, the Cleaner Lagos Initiative will continue to yield good results and ultimately the current waste challenge being experienced will soon be a thing of the past,’’ he said.

Durosinmi-Etti said that it was important for Lagosians to cooperate with the government to ensure that CLI not only succeeded, but that it was sustained.

He said that Lagos was on the march towards joining some other parts of the world where waste was no longer a burden but wealth.

According to him, this is the direction of a new initiative in solid waste management to create wealth from waste, to utilise waste for many income generating potentials, and ultimately reduce waste.

“When we put the environment first, development endures, because we cannot lay claim to economic prosperity in the face of environmental insecurity.

“We must all strive to take good care of the environment, as God never created the environment to be distressed or degraded, it is human impacts that have put it in the current worrisome state,’’ he said.

As 40 world leaders gather to participate in US President Joe Biden’s first step onto ...