Within the next four years, the Lagos State Government will plant some four million trees to add to the six million already planted in the past eight years. 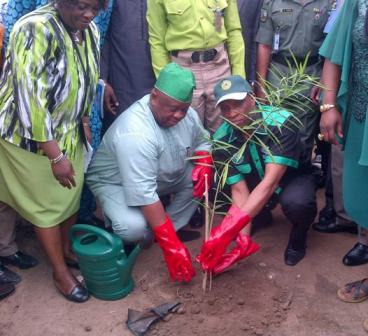 This will be in fulfillment of its resolve to plant 10 million trees by 2020 which, government officials say, was informed by the desire to mitigate the impact of climate change.

So far, the state government has planted about six million trees since the launch of its much vaunted tree planting campaign in 2008.

Speaking at the 2016 Tree Planting Day ceremony that held on Thursday at the National Youth Service Corps (NYSC), Camp, Orile-Agege area of Lagos, Governor Akinwunmi Ambode disclosed that his administration was working frantically to meet the target of planting 10 million trees by 2020.

He said the annual event was one of the most reliable and cheapest means of combating the effect of global warming and climate change, adding that planting of trees was very important for the environment as trees provide oxygen, cool the atmosphere, help conserve energy, save water and prevent erosion.

The theme of this year’s tree planting is: “Lend a hand to save trees.”

Ambode, who was represented by the Secretary to the State Government, Tunji Bello, noted that the peculiarity of Lagos as a coastal city-state makes it prone to several environmental challenges, which demanded that the government and the citizens of the state carried out infrastructural development without jeopardising the environment.

“The fast growing urban development areas across the state must curtail the uncontrolled felling of trees and ensure all developers adhere to all the town planning and greening regulations. We must plant trees to replace those removed from vast acres of land so that we reduce the rate of ocean surge and erosion with its attendant problem of displacement of homes and communities,” he said.

The governor further said scientists had stated that the world needed about 30 billion trees annually and that “if the last tree dies, no human will survive. A world without trees is a world without life so we must resolve as a people, to ensure that we not only save our trees but plant more trees. As a country, if we resolve to plant one million trees per state every year, we shall be able to achieve 360 million trees by the next decade which will go a long way to protect our nation.”

He said the government remained committed to the cause of tree planting and would vigorously pursue the state greening policy of total regeneration of degraded sites, while urging the private sector to partner with the government, as only a collective action by all could tackle the environmental problem of global warming and flooding.

He charged residents of Lagos to imbibe the culture of tree planting in order to beautify the environment, adding that planting trees had helped to convert criminal hideouts and open spaces into orchids and woodlands.

Adejare stated that while it was generally agreed that trees were needed to make furniture, food and others, government was against indiscriminate felling of trees as it would bring about ecological imbalance.

Previous: Land, biosafety laws may be repealed under proposed agenda
Next: Street trading in Lagos: Pros and cons