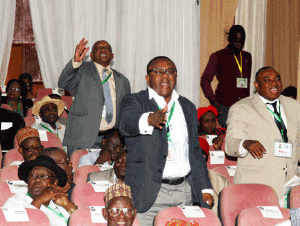 The National Conference, which began on March 17, came to an end on Thursday morning.

The series of meetings the Confab chairman, Idris Kutigi, held with zonal leaders on Wednesday paid off as the delegates agreed on a position on the controversial draft constitution.

The confab ended with a minor amendment to the third volume of the confab report by replacing the draft constitution to read “Resolutions of the conference as draft amendments to 1999 constitution.”

The amendments to the third volume was moved by Maina Waziri.

Richard Akinjide moved the motion for the adoption of the confab report. The motion was seconded by ‎Yadomah Mandara.

ALSO READ:  Diezani prays to defend herself in suit against SAN