Visiting the southeastern city of Hangzhou in China on Saturday, United Nations (UN) Secretary-General Ban Ki-moon commended the leaders of that country and the United States for formally joining the Paris Agreement on climate change. 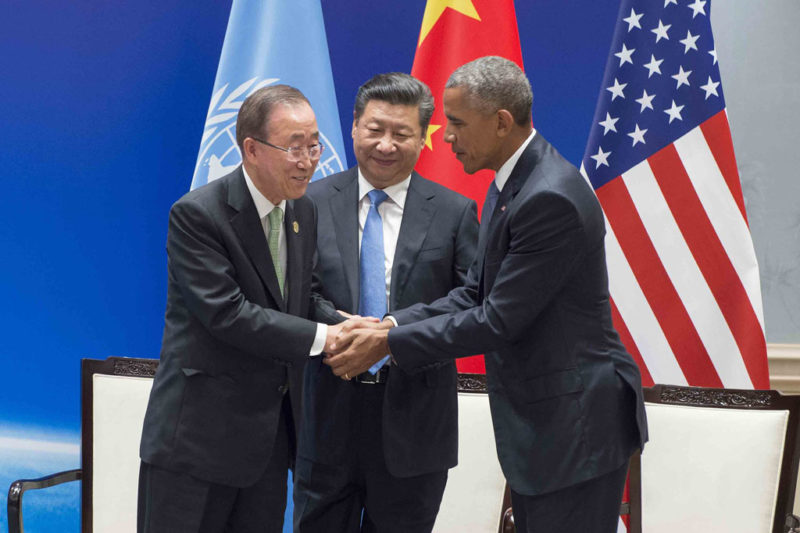 “With China and the United States making this historic step, we now have 26 countries who have ratified and 39 per cent of global emissions accounted for, to be exact,” he added. China and the US together account for nearly 38 per cent.

In a related development, Patricia Espinosa, Executive Secretary of the United Nations Framework Convention on Climate Change (UNFCCC), on Saturday thanked the two countries for the ratification.

“I would like today to thank China and the United States for ratifying this landmark agreement – an agreement on which rests the opportunity for a sustainable future for every nation and every person,” she said, adding: “The earlier that Paris is ratified and implemented in full, the more secure that future will become.”

The UN climate chief went further: “Bringing the Paris Agreement into force underlines that the momentum and international solidarity witnessed in 2015 continues into 2016 among big and small nations and among rich and poorer countries.

“The UN Secretary General’s special event in New York on 21 September offers a further, focused opportunity for others to join this wave of ambition and optimism towards a better and sustainable world.”

The Paris Agreement, adopted by 195 parties to the UN Framework Convention on Climate Change (UNFCCC) last December in Paris, calls on countries to combat climate change and to accelerate and intensify the actions and investments needed for a sustainable low carbon future.

The agreement will enter into force 30 days after at least 55 countries, accounting for 55 per cent of global greenhouse gas emissions, deposit their instruments of ratification or acceptance with the Secretary-General.

During Saturday’s ceremony, which was also attended by China’s President Xi Jinping and US President Barack Obama, Mr. Ban noted: “We need another 29 countries representing 16 per cent of global emissions to bring this Paris Agreement into force.

“I am hopeful and optimistic that we can do it before the end of this year and before my term as Secretary-General of the United Nations ends.”

The UN chief will convene a special event on 21 September at the UN Headquarters in New York for the deposit of instruments of ratification, acceptance, approval or accession to the Paris Agreement on climate change. The event will also provide an opportunity to other countries to publicly commit to the agreement before the end of 2016. President Muhammadu Buhari of Nigeria is expected to sign the agreement at the event.

“I urge all leaders, particularly G20 countries, to accelerate their domestic ratification processes so we can turn the aspirations of Paris into the transformative climate action the world so urgently needs,” Mr. Ban said. He is scheduled to attend the G20 summit in China on Sunday.

With the Paris Agreement, the world has an equitable, durable yet flexible global framework for reducing emissions, strengthening climate resilience and providing support to developing countries to build low-carbon economies and adapt to inevitable climate impacts, the Secretary-General said.

This global climate agreement will accelerate the growth of clean energy and help us achieve the Sustainable Development Goals and will strengthen international stability and security, save lives and improve human well-being, he added.

“And now, with these two big countries joining the Paris Agreement, I am sure that we can really set a very ambitious dynamic step forward,” he concluded.

In a statement, Mogens Lykketoft, the President of the UN General Assembly, said that he was “pleased to hear this very good news coming out of Hangzhou just before the opening of the G20 meeting.”

China’s own ambitious action plan is now rolling with announcement of guidelines for establishing a Green Financial System and a goal for green projects of $600 billion each year, he noted.

“The China-US ratification and the great Chinese initiatives put useful pressure on those UN-members that have not yet ratified or made their own national action plans,” he said.

Previous: Bassey to explore COP22 issues at webinar
Next: How ocean warming is impacting species, ecosystems