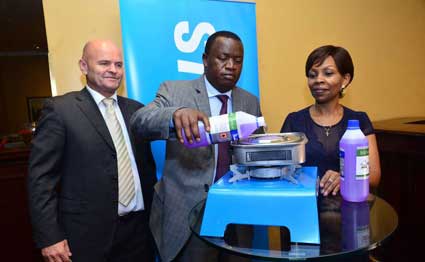 Environment Principal Secretary, Charles Sunkuli (centre), tries out an ethanol stove in Nairobi on January 31, 2018 during the launch of phase II of the Samsung Ethanol Stove Project. The Ministry of Environment has pledged to support the use of ethanol stoves. Photo credit: Salaton Njau / Nation Media Group

The Principal Secretary for Environment and Forestry, Charles Sunkuli, said the stoves launched in partnership with electronics firm, Samsung, would help reduce dependency on charcoal in the camp.

“The project will help reduce carbon dioxide emission in the country by more than 500,000 tonnes in the next five years,’’ Sunkuli said during the launch in Nairobi.

He said the camp that had 200,000 refugees would benefit from a subsidy of 12,000 eco-friendly ethanol stoves.

The official said that Kenya was in the process of formulating a new climate change action plan from 2018 to 2022, that would guide the country in actions that would deliver on an obligation of the climate change Act 2016.

About 80 per cent of Kenyans who live in urban areas use charcoal for cooking, thus putting a lot of pressure on the households from respiratory related diseases as well as adverse effects on the forest cover.

About 10 kilogrammes (kg) of wood is used to make one Kg of charcoal that is putting a lot of strains on the country’s forests.

The country in 2015, estimated a loss of 5.6 million trees daily due to deforestation.

“The use of ethanol for this cooker instead of charcoal will enable households benefit from an eco-friendly environment with less smoke, while reducing their cooking fuel costs and cooking time,’’ Patricia Kingori, Samsung Electronics East Africa’s Head of Marketing and Citizenship, said.

Kingori said that there was the urgent need to create a healthy environment for future generations through projects that significantly address the rate of deforestation and carbon emissions.