Japan, UN move to the rescue of South Sudanese refugees

March 26, 2018 Comments Off on Japan, UN move to the rescue of South Sudanese refugees 492 Views

Through the support of the Government of Japan, the United Nations Human Settlements Programme (UN-Habitat) has launched the project “Support to Hosting Communities Affected by South Sudanese Refugees in White Nile State”. 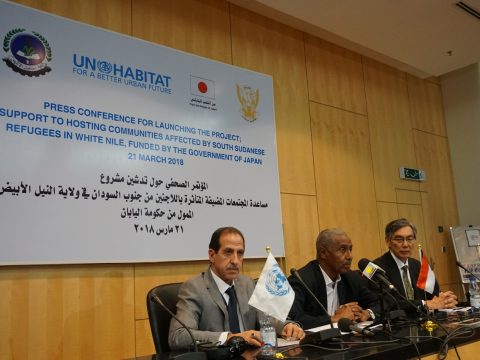 Officials at the Project Launching Ceremony was held in Khartoum, Sudan

The project will also enhance self-reliance of the hosting communities and South Sudanese refugees particularly youth and women through on-the-job training of self-help construction through the improvement of market places in Aljabalain.

The Project Launching Ceremony was held in Khartoum, Sudan on Wednesday, March 21, 2018 with Mr. Wael Al-Ashhab, Head of UN-Habitat Sudan Country Programme, assuring that UN-Habitat was committed to work with the governments and partners and emphasised the need to support communities as a whole. He said this would be done in collaboration with the hosting communities, South Sudanese refugees, civil societies, local governments and private sectors, to ensure seamless transition from the emergency response to long-term solutions, and to prevent deterioration of living environment and health condition for the future.

Mr. Wael underlined the huge challenge in Sudan, caused by significant number of the population consisting of Internally Displaced Persons (IDPs), refugees and returnees those who need urgent humanitarian assistance, durable solutions and development support. Particularly, a large number and unexpected influx of South Sudanese refugees fled into Sudan has been radically increasing, and high percentage of the refugees are temporary accommodated to White Nile State that severely impacted the hosting communities.

Mr. Wael thanked the Government of Japan for supporting the project which contributes to broader aspects of the town, including living environment, livelihood and health to ensure that both South Sudanese refugees and the hosting communities can live in dignity.

Ambassador of Japan to Sudan Shinji Urabayashi, said in his statement, “It is very important to bring both the refugees and the local community members together, and involve them in bettering their own living environment. Also, I believe this co-working process will lead to creating a harmonious integration between the community members and the refugees.”

He praised the government of Sudan for the generosity in accepting the South Sudanese refugees.

ALSO READ:  Nations commit to roadmap to shape future of work in Africa