More than 300 whales including 200 pregnant females have been slaughtered in Japan’s latest whaling mission in the Southern Ocean. 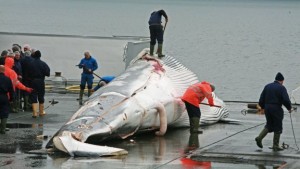 Japan confirmed the kill as its ships returned from their “scientific” expedition in the Antarctic region on Thursday.

Its actions are in defiance of international criticism and despite a 2014 UN legal decision that ruled so-called scientific whaling activity in the Southern Ocean was a front for commercial hunts.

“Not in 40 years has an Australian government done so little to prevent whaling on our watch and in our waters,” he said.

He accused the government of breaking Environment Minister Greg Hunt’s personal election promise to send a patrol vessel to the Southern Ocean to monitor whaling activity.

The government has repeatedly refused to confirm whether it undertook any monitoring missions in the Southern Ocean this summer.

It has also refused to release legal advice it sought when Japan announced it would resume whaling, despite the International Court of Justice ruling.

Four survey ships from Japan’s Institute of Cetacean Research were in the Antarctic region over a period of 115 days from December 1 last year.

The institute’s report on Thursday confirmed 333 minke whales were captured.

Darren Kindleysides, director of the Australian Marine Conservation Society, said the 2014/15 summer was the first time in 70 years Japan had stopped its whaling program – but the break was short-lived.

He said Australia’s leading international experts had examined Japan’s new so-called scientific research program this year and found it was also a guise for killing whales, and a breach of international law.

“That puts the onus on the Australian government to make sure this is the first and the last season of Japan’s new so-called scientific program.”

The Australian government in December described Japan’s decision to resume whaling over the summer as “deeply disappointing” and insisted it raised concerns at the highest level of the Japanese government.

It had said it would consider sending a Customs patrol vessel to the Southern Ocean and explore options for legal action.

But conservation group Sea Shepherd in February said the Japanese fleet had faced little or no scrutiny over the summer and Australia and New Zealand seemed unwilling to send a ship to intercept them.