UN Secretary General, António Guterres, while celebrating the International Women’s Day (IWD), emphasises that empowering women and girls is the only way to protect their rights and make sure they can realise their full potential

Women’s rights are human rights. But in these troubled times, as our world becomes more unpredictable and chaotic, the rights of women and girls are being reduced, restricted and reversed.

Empowering women and girls is the only way to protect their rights and make sure they can realise their full potential.

Historic imbalances in power relations between men and women, exacerbated by growing inequalities within and between societies and countries, are leading to greater discrimination against women and girls. Around the world, tradition, cultural values and religion are being misused to curtail women’s rights, to entrench sexism and defend misogynistic practices.

Women’s legal rights, which have never been equal to men’s on any continent, are being eroded further. Women’s rights over their own bodies are questioned and undermined. Women are routinely targeted for intimidation and harassment in cyberspace and in real life. In the worst cases, extremists and terrorists build their ideologies around the subjugation of women and girls and single them out for sexual and gender-based violence, forced marriage and virtual enslavement.

Despite some improvements, leadership positions across the board are still held by men, and the economic gender gap is widening, thanks to outdated attitudes and entrenched male chauvinism. We must change this, by empowering women at all levels, enabling their voices to be heard and giving them control over their own lives and over the future of our world.

Denying the rights of women and girls is not only wrong in itself; it has a serious social and economic impact that holds us all back. Gender equality has a transformative effect that is essential to fully functioning communities, societies and economies.

Women’s access to education and health services has benefits for their families and communities that extend to future generations. An extra year in school can add up to 25 per cent to a girl’s future income.

When women participate fully in the labour force, it creates opportunities and generates growth. Closing the gender gap in employment could add $12 trillion to global GDP by 2025. Increasing the proportion of women in public institutions makes them more representative, increases innovation, improves decision-making and benefits whole societies.

Gender equality is central to the 2030 Agenda for Sustainable Development, the global plan agreed by leaders of all countries to meet the challenges we face. Sustainable Development Goal 5 calls specifically for gender equality and the empowerment of all women and girls, and this is central to the achievement of all the 17 SDGs.

Within the UN, I am establishing a clear road map with benchmarks to achieve gender parity across the system, so that our Organisation truly represents the people we serve. Previous targets have not been met. Now we must move from ambition to action.

On International Women’s Day, let us all pledge to do everything we can to overcome entrenched prejudice, support engagement and activism, and promote gender equality and women’s empowerment. 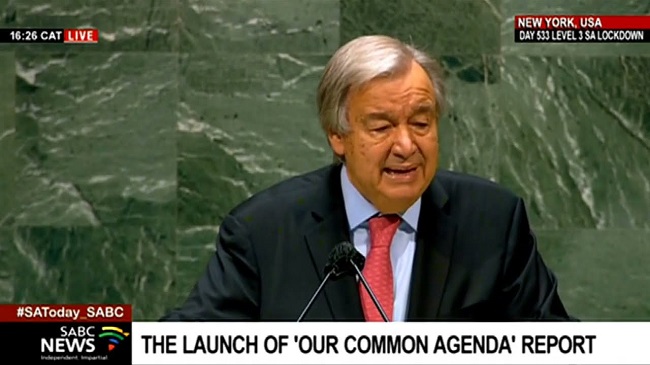 UN Secretary-General António Guterres on Friday, September 10, 2021 released a report, which called for ...