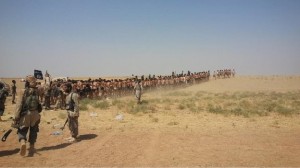 The Syrian Observatory for Human Rights said the soldiers were captured while attempting to flee to Hama province after IS stormed the Tabqa airbase.

Twitter accounts belonging to jihadists had boasted about 200 deaths, it added.

On Wednesday, photos and a video were posted online appearing to show more than 100 men in their underwear being marched through the desert at gunpoint.

In the video, militants shout “Islamic State” and “There is no going back”.

In images published earlier this week, IS fighters wearing balaclavas could be seen shooting dead at least seven kneeling men at the airbase.
Tabqa airbase – near the northern city of Raqqa, an IS stronghold – fell to IS on Sunday after weeks of fierce fighting.

The Observatory said 346 IS fighters and more than 170 members of the security forces were killed in the final battle, which lasted five days.

The head of the Observatory, Rami Abdul Rahman, told the AFP news agency that about 1,400 troops had been stationed at the airbase, 700 of whom managed to escape.

Two hundred appeared to have been caught and executed by IS as they attempted to cross the desert to government-held territory in the Orontes Valley to the west, he said. Another 500 men were on the run, he added.

After the airbase’s capture, Syrian state television said the army was “regrouping” and that a “successful evacuation” had taken place.

On Tuesday, UN investigators said Islamic State militants had committed “mass atrocities” in Syria and had recruited children as fighters.

Their report said public killings were a “common spectacle” in areas run by the jihadist group and that local people were forced to watch.

At the same time, the investigators said that Syrian government forces had also committed atrocities by dropping barrel bombs and chlorine gas from helicopters, shelling hospitals and torturing and killing civilians.