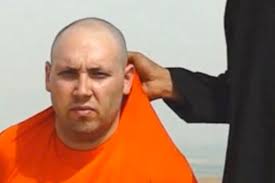 The monitoring organization, SITE Intel Group, made the announcement on Twitter. It said that ISIS had also threatened to execute a British captive, David Cawthorne Haines.

Last week, Sotloff’s mother, Shirley, pleaded directly with the leader of ISIS to spare her son.

“We have not seen Steven for over a year, and we miss him very much,” she said in a video message to the ISIS leader, Abu Bakr al-Baghdadi. “We want to see him home safe and sound and to hug him.”

Sotloff, 31, wrote about conflicted in the Middle East for Time magazine and other publications. He grew up in Miami and attended the University of Central Florida in the early 2000s. He has aTwitter account, and last posted Aug. 3, 2013, just before he disappeared.

ISIS threatened Sotloff’s life in another video last month. In that video, ISIS beheaded another American journalist, James Foley, and said that it would kill Sotloff unless the United States ended airstrikes against the militant group.