A new investigation by CSE/Down To Earth magazine has raised questions about the rationale behind the Indian government’s recent move to auction more coal blocks. On June 18, 2020, Prime Minister Narendra Modi had announced that 41 new coal blocks would be opened for auction to the private sector. The logic behind the decision, as offered by the government, was that the country needs the coal to power its energy and industrial sectors.

Releasing Down To Earth’s investigation report at a webinar in New Delhi on Tuesday, August 18, 2020, the magazine’s editor Sunita Narain said: “Our forests are where our coal reserves are – forests and coal are intrinsically linked in India.And our poorest people live in these areas, which also hold our most abundant watersheds. If at all we must mine coal, which itself has serious pollution implications, we need to do after careful consideration that we have taken utmost care not to destroy forests needlessly and this means the need to optimise on current mines – not mine more.”

She added: “We recognise the fact that India needs energy security. In countries like ours, energy poverty is an unacceptable reality. We need access to energy to meet the needs of millions of people. But we also know very well that mining and using coal has immense environmental impacts –impacts that are detrimental for our forests, water bodies and people and their livelihoods and add to the health burden because of air pollution. Are we able to balance these two counter realities? In our view, we are failing to do so abysmally.”

Since 1980, when the Forest Conservation Act was enacted, India has diverted 0.53 million hectares of forestland for mining – the bulk of it for coal. Since 2015, 49 coal mining projects have been cleared. This is expected to have led to the decimation of over 19,000 hectares of forestland; cutting down of over 1 million trees; and displacement of over 10,000 families, says the Down To Earth investigation.

Said Narain: “It is clear that we are not concerned about maintaining a balance. There is clear evidence that existing processes of assessing and diverting forests under the Forest Conservation Act have been subverted. In fact, our research finds that these have been weakened so much that they have become farcical.”

The government argues that it has moved out of the system of categorising forests as No-Go and instead has devised a sophisticated decision support system so that each forest block, which is required to be diverted for mining, can be assessed in terms of ecological, hydrological and other parameters. However, DTE’s investigation finds that this so-called scientific process of decision-making has been made meaningless.

This has happened because, firstly, there is lack of data on the ecological qualities of the forests which would allow for the software to identify such areas as inviolate. Secondly, it can be ‘tweaked’ – as indeed minutes have revealed – to make the No-Go, into a Go-forest. DTE has published minutes of meetings where the coal ministry officials were ‘deputed’ to work with the Forest Survey of India (FSI) to ‘rework’ the conditions so that forests can be cleared for mining.

Narain points out that significantly, every time the government offers newer opportunities for mining coal, it targets denser forests. Since 2015, of the 49 blocks cleared for coal mining, nine were in No-Go areas (No-Go refers to “unfragmented forest landscapes having a gross forest coverage ≥ 30 per cent and weighted forest coverage ≥ 10 per cent”). In 2020, of the 41 blocks put up for auction, 21 feature in the original No-Go list.

CSE/DTE also investigated the rationale behind the auction of new coal mines to understand which sector would consume larger quantities of coal – so needed for energy security and self-reliant India. It finds that whereas today, over 70 per cent of the coal is consumed in the thermal power industry, this is not expected to grow exponentially. This sector is already stressed and will remain underutilised in the future as more sources of energy – renewable or hydel are built.

Coal usage will actually in the unorganised, small-scale industries, which “has huge pollution implications,” says Soundaram Ramanathan, one of the researchers behind the investigation.

Narain points out that India is currently not utilising its existing capacity fully – an RTI response by the Union Ministry of Coal says that 67 per cent of the mines auctioned since 2015 are not yet operational. Between 2015 and 2020, the government has tried to auction 112 mines, but succeeded in only 42 cases. So, why should we auction new coal mines that will come at the cost of our dense forests and habitats of people? This when we find that our systems to ensure a balanced decision-making – between the interests of coal and of forests – have been so deliberately disabled and weakened.

“In this strategy, it would seem, India is condemned to remain locked with a dirty fuel, which is toxic for people’s health and will be a death-knell for our forests. Let us hope this does not happen,” concludes Narain. 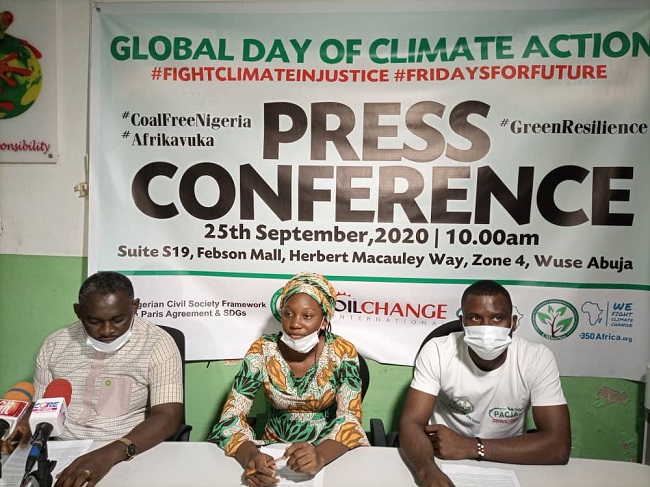 Stakeholders in Nigeria’s Environment sector on Friday, September 25, 2020 called on the Federal Government ...