May 9, 2021 Comments Off on Insurgency in North-East aids desertification, prevents tree planting 713 Views

States in the North-East geo-political zone of Nigeria are reinforcing proactive measures to check the threat of desertification and erosion in their respective areas.

According to a recent survey, state governments and other stakeholders have expressed concern over the situation, expressing the need for concerted efforts by all to check the menace.

They identified causes and suggested measures to be taken, saying the involvement of the populace in the process was paramount.

One of the major causes identified as responsible for the increase in areas affected by desertification in the North-East, is insurgency which has resulted in unending security challenges.

In Borno, the state government said it had been supporting the planting of three million tree seedlings annually as part of measures to check desertification.

According to the Permanent Secretary, Ministry of Environment, Alhaji Mohammed Dankoli, planting of trees is in line with the 25-year Development Plan of Borno government.

Dankoli said the plan, which intended to mobilise citizens of Borno to plant at least a minimum of three trees per person annually, was aimed at recovering a minimum of one kilometre every year.

He observed that the lingering security challenges in the sub-region had assisted in increasing desertification in the state.

Dankoli said many internally displaced persons who lost their sources of livelihood, had resorted to felling of trees for fuel, or selling as firewood, to make a living.

According to him, even the military are engaged in clearing trees in areas with thick forest because of the belief that such forests are used by insurgents as hideouts.

Dankoli said because of this development, a lot of trees, some as old as 50 years and above, had been cut down.

The permanent secretary said efforts by the ministry and other stakeholders to engage in mass planting of trees were thus threatened by insurgency which brought about the insecurity.

He said areas mostly affected in the northern parts of the state were not accessible due to threats of attacks from insurgents.

“Last year, we nurtured one million seedlings but could not distribute all because of insurgency,” Dankoli said.

Dr Usman Ali, the Regional Director of African Climate Change Research Centre, a non-governmental organisation engaged in the fight against desertification in Borno, said his organisation planted 3,000 trees in 2020.

“We intend to plant 10,000 trees this year, starting from Damasak, the headquarters of Mobbar Local Government Area.

“Gum Arabic and Neem trees are part of the seedlings we are going to distribute because of their capacity to survive arid conditions,” Ali disclosed.

He explained that desertification had continued to pose threat to agriculture, thereby increasing poverty in the society.

On its part, a Gombe-based non-governmental organisation, Jewel Environmental Initiative, called on the Gombe State Government to introduce the issuance of “tree-cutting permits” to check illegal felling of trees.

Mr. Ismail Bima, the Chief Executive Officer of the organisation, said the measure had become necessary as deforestation in the state had taken a new trend.

According to Bima, the state government has done a lot in the area of planting trees across the state but enforcement of laws to check illegal felling of trees is lacking.

“If you look at the rate at which trees are being cut down indiscriminately, you will agree with me that we need to introduce ‘tree-cutting permits’ in communities.

“Imagine a farmer selling a locust tree of about 20 to 30 years old to a wood cutter between N3,000 and N5,000! This is a serious issue an as an environmentalist, it is really disturbing,” he lamented.

Bima said that the impact of these activities had led to several environmental challenges such as flooding and land degradation.

He advised the state government to ensure that environmental and forestry laws were enforced to discourage activities leading to deforestation and desertification.

Meanwhile, the Bauchi State Environmental Protection Agency has attributed the 5 km square of desertification and soil erosion in the state, to human activities and natural factors.

Malam Aminu Ibrahim, Director in charge of Environmental Conservation in the agency, listed the natural causes as drought, change in climatic conditions and excessive rainfall.

According to Ibrahim, deforestation, poor farming techniques, bush burning, and construction work are some of the human factors leading to desertification and erosion in the area.

He said the effects of desertification and erosion were the degradation of the environment, loss of soil productivity, global warming, and climate change, among others.

Ibrahim said measures taken by the state government to check the menace included establishment of orchards and shelter belts, as well as introduction of ecological committees.

He said that massive awareness campaigns and review of environmental laws and policies would also help in addressing the challenges, adding that steps were being taken to review the laws.

Malam Mantau Maisamari, Director, Environment, in the state Ministry of Environment, said the northern parts of the state were the most affected by desertification due to indiscriminate felling of trees.

Maisamari said gully erosion was common across all the local government areas as majority of them were flood prone.

In Yobe, the Commissioner for Environment, Alhaji Sidi Karasuwa, said the state was one of the 11 frontline states in the country most affected by desertification.

“Of the over 1,500 km of distance shared between Nigeria and Niger Republic with the 11 frontline states, Yobe has the longest, with over 300 km of such border.

“Therefore, it can be seen clearly that Yobe is one of the most affected states in terms of desertification more than any other state in Nigeria,” Karasuwa said.

He explained that while desertification affected mostly the northern part of the state, erosion caused more environmental hazards in the southern part.

Karasuwa added that both desertification and erosion had affected the socio-economic activities of the people.

“Agriculturally, desertification and erosion cause low agricultural output in terms of harvest, thereby lowering productivity of the people.

“Whenever there is desert encroachment, the number of trees and the amount of rainfall reduce significantly, thereby increasing the rate of poverty among people,” the Commissioner said.

He said that in an effort to address the challenge, the state government distributed three million seedlings in 2020, and ensured that same were planted.

“This year also, the state government has directed the planting of another five million seedlings,” Karasuwa said.

In Adamawa, Mrs Sera Gundiri, Director, Forestry Department, Adamawa State Ministry of Environment, said rampant felling of trees was the major cause of desertification in the state.

Gundiri said the northern and central parts of Adamawa had lost their vegetations to rapid desert encroachment.

She added that in order to protect the remaining vegetation and forest reserves, government banned felling of live trees and use of chainsaws in the state.

On erosion, Malam Salisu Hassan, Deputy Director, Degradation Control Department, said all the 21 local government areas in the state were seriously under threat of gully erosion.

Yunusa cited the example of the manner the Great Green Wall Project was being implemented, adding that the project had almost collapsed. 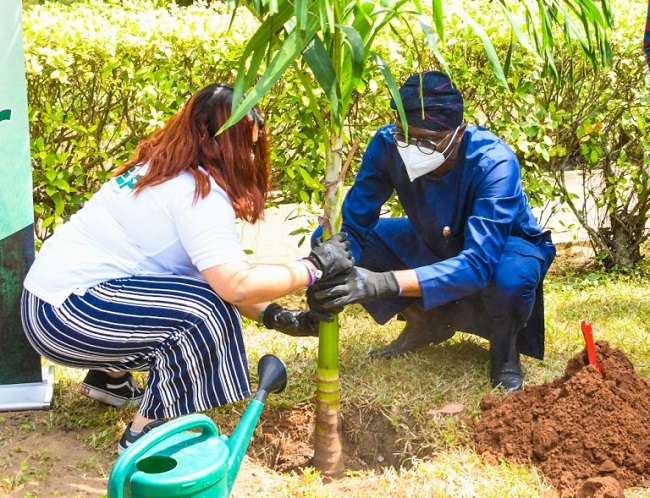